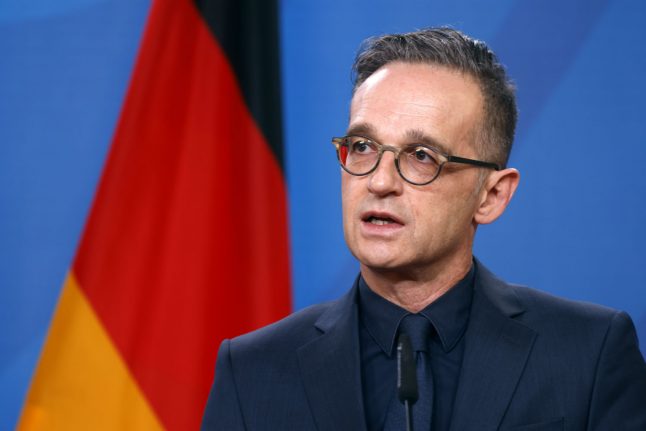 “It is important that all politicians who reach people directly, establish trust in the electoral process and the results,” Maas said in a statement, adding that it would be “premature” to comment further given that ballots were still being counted.

“We must now be patient,” said the minister, whose country holds the rotating presidency of the European Union.

Trump had declared himself the winner before all the votes were counted and announced that he wanted to have another count stopped by the US Supreme Court.

The German government as a whole did not want to comment on Trump’s statement Wednesday, pointing out that the final result of the election was still missing.

“As long as that is the case, the German government is following everything closely, but it does not comment on the state of affairs,” said government spokesman Steffen Seibert.

“A candidate, even if he is the incumbent president, who calls for postal votes not to be counted any further, is acting anti-democratically”, SPD leader Saskia Esken told the Rheinische Post.

Left leader Bernd Riexinger spoke of a “renewed attack on democracy”, and the Green party politician Reinhard Bütikofer called it an “unprecedented attack”. There had not been anything comparable since the founding of the United States more than 230 years ago, he said.

FDP leader Christian Lindner predicted a “dramatic conflict situation” on public broadcaster ZDF. This could have unforeseeable consequences for the US, but also for the rest of the world, he said.

“A situation will of course arise in which the United States may not be able to act at all on the international level. They will then only deal with themselves.”

The German government's Transatlantic Coordinator, Peter Beyer, expressed concern that violent clashes could occur if the situation is prolonged.

“If it takes time to reach a legally binding decision on the election winner, it is to be feared that confrontations between the two camps will also occur on the streets,” the CDU politician told DPA.

But he added: “I consider the scenario of a civil war to be completely exaggerated.”

The right-wing Alternative for Germany (AfD) was the only party represented in the Bundestag to react cautiously to Trump's premature declaration of victory.

“(Trump's statement) is probably due to the excitement of the election,” party leader Jörg Meuthen told DPA in Berlin, saying that no one needs to worry about the functioning of democracy in the USA.

In Germany, many had hoped for a Biden win. In pre-election polls, a large majority had hoped for the Democratic Party's challenger as US president, with only about one in ten people in favour of Trump.

German-American relations have plummeted to a low point following the election of the the 74-year-old. For four years, he regarded Germany primarily as a rival and not an ally, and even put pressure on it with sanctions.

'We are not prepared for this'

“We are not prepared for this,” the chairman of the Foreign Affairs Committee in the Bundestag told ARD television.

If Trump were to remain president for another four years, there would be an increase in everything that had been experienced in the first term of office. “It makes a difference whether you doubt NATO for four years or whether that happens for eight years.”

Beyer stressed, however, that Germany would have to strive for constructive cooperation with the US even if Trump won the elections.

“It would be downright irresponsible of us to definitely retreat into the dung heap if Trump wins,” he said.

Before the election, Maas had announced that, regardless of the outcome, he would approach the US with proposals for a fresh start in transatlantic relations. He spoke of a “New Deal”. 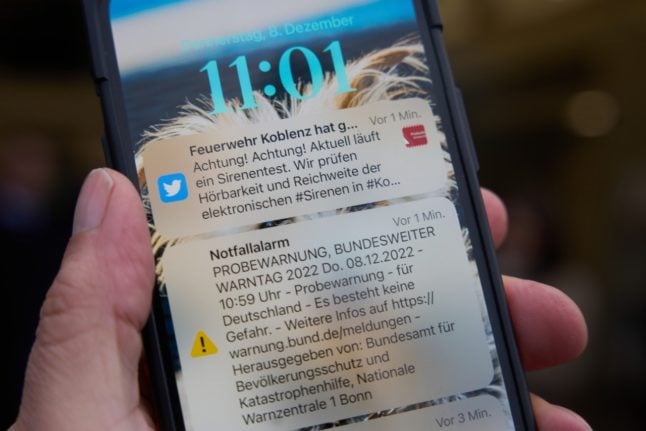 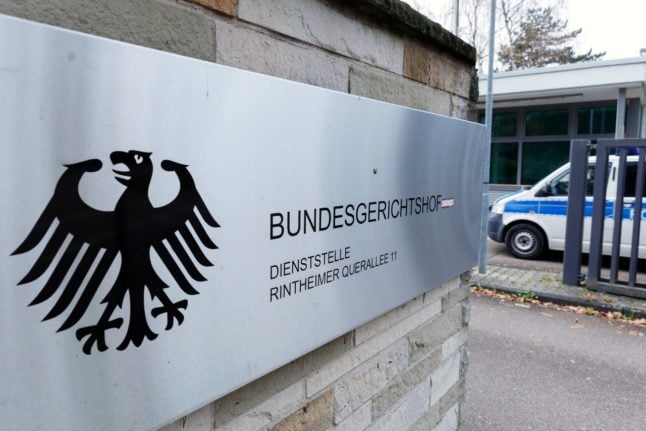 Using so-called cell broadcast technology for the first time, all cell phone users in Germany with a German phone number were to receive a blaring emergency notification for the second Warntag (warning day). This was to test how well they would be alerted to an actual urgent situation, such as flash flooding or a blackout.

The technology sends out alerts regardless of the phone provider or if a person is signed up for them. Even if their phone is switched to silent mode, phone users receive a loud buzzing notification that’s hard to ignore.

READ ALSO: All cell phone users in Germany to be part of disaster ‘warning day’

But on Thursday at 11 am that was not the case for everyone.

According to initial information from the BKK, many Telekom customers in particular did not receive the warnings.

Another warning day is already planned for September of next year, in what will now be an annual test.

Deactivated test warnings in the phones’ system settings could also be a reason for the phones remaining silent. Many older models, such as the iPhone 6 or devices with Android 10, are also unable to use cell broadcast.

But the day was still deemed a “success”, according to BKK President Ralph Tiesler in a statement.

“According to preliminary findings, the nationwide Warning Day 2022 was a success!” said Tiesler. “The interaction of the individual systems has worked and people have become aware of the important topic of warnings. It is still too early for conclusive results.

“We will now evaluate the feedback and thus be able to further optimize the systems. There’s still room for improvement.”

Interior Minister Nancy Faeser (SPD) called the test “an important step” in improving how well people in Germany are protected in an emergency.

People around Germany can also chime in with how well the test worked – or didn’t – using an official survey: https://warntag-umfrage.de/

Even the warning apps Katwarn or NINA didn’t show an alert for all users, or only did 20 minutes past the 11am deadline.

Around Germany sirens sounded off, billboards flashed warnings at train stations and, in some communities, emergency vehicles drove through the streets broadcasting the test warning.

But some cities – including larger ones like Berlin – stayed particularly silent as they are not yet connected to a Modular Warning System.

Why no sirens in Berlin ➡️ They haven’t yet been connected to the modular warning system.#Warntag2022 #warntag pic.twitter.com/47ZOLFDhCl

Berlin was also set to have 400 sirens installed by the end of 2022, although only 20 of them had been installed by August, according to the Tagesspiegel.

The importance of reliable warning systems was highlighted by the flood disaster in Rhineland-Palatinate and North Rhine-Westphalia in July 2021, when people were not informed in time of the impending danger. Afterwards, a broad debate arose on how this could be improved.

Amid an energy crisis and war within Europe, many people are also hypervigilant about what Germany would do in the event of a wide-reaching emergency.

The first countywide Warning Day took place in September 2020, without cell broadcast notifications, and was afterwards criticized that it did not reach enough people. 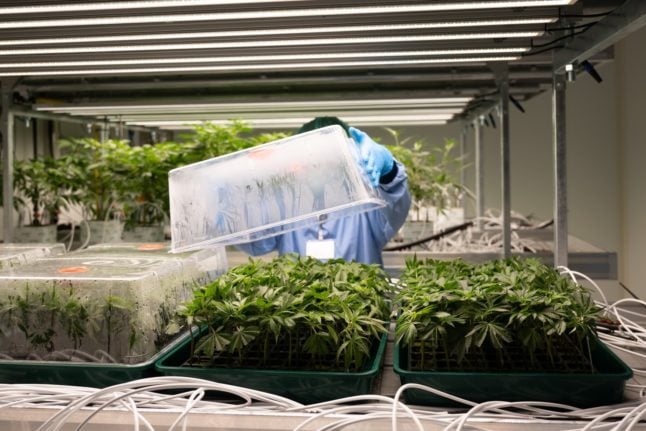 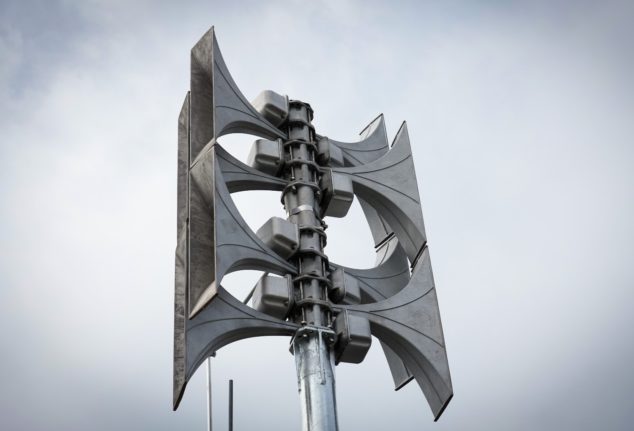 POLITICS
All cell phone users in Germany to be part of disaster ‘warning day’
Url copied to clipboard!