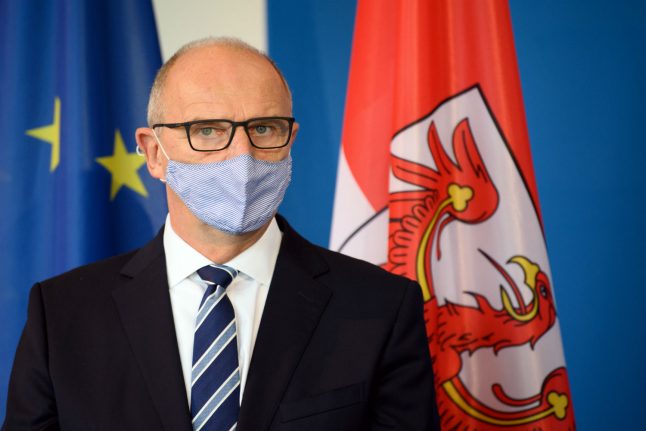 Woidke at a press conference in Brandenburg's capital of Potsdam on October 6th. Photo: DPA

Dietmar Woidke, the state premier of Brandenburg, confessed on Tuesday morning that he had been diagnosed with the virus after developing cold-like symptoms over the weekend.

Woidke was one of a handful of high-profile politicians and executives who attended the subdued opening of Berlin Brandenburg Airport (BER) on Saturday, nine years late and in the middle of a global pandemic.

READ ALSO: What you need to know about Berlin's 'cursed' new airport

However, a test for Daldrup came back negative, the Berlin Brandenburg Airport Association announced on Wednesday morning. Schauer also tested negative but is still in quarantine.

The results for Müller have not yet been revealed, although the mayor announced Wednesday that was continuing to work from home.

A larger grand opening party had been cancelled over virus concerns.

EasyJet said in a statement that after learning of Woidke's infection, the airline's chief executive “Johan Lundgren, as a result of his participation in Saturday's event at BER airport, is being tested today as a precautionary measure and placed in domestic quarantine.”

A spokesman for Lufthansa said the airline's chief executive Carsten Spohr had cancelled a planned trip to Berlin and would be tested today “as a precaution”.

“All the of the required distancing and hygiene rules were observed during Saturday's event at BER,” the spokesman said.

BER's opening on Saturday came after years of embarrassing delays, scandals and spiralling costs that saw the project meant to celebrate German reunification turned into a national laughing stock.

Airport executives and local media have dubbed the airport “cursed”.

Transport Minister Scheuer had said at the opening he hoped the event would mark “the end of jokes about BER.”

Woidke is the first politician in the Brandenburg state government to report a positive test result for the coronavirus.

Interior Minister Michael Stübgen (CDU) and Health Minister Ursula Nonnemacher (Greens) went into a domestic quarantine as a precautionary measure and had themselves tested.