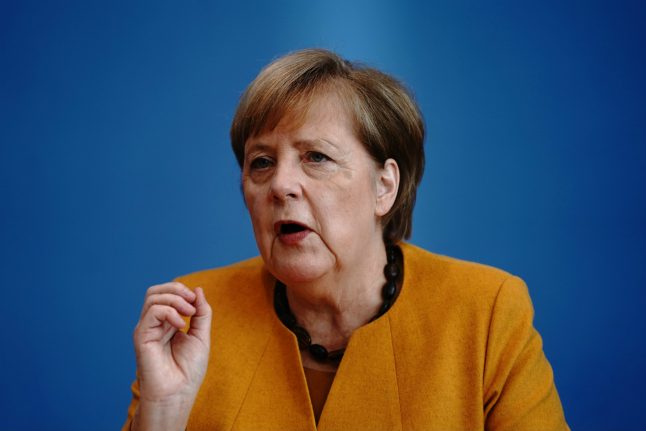 “We must not allow the spread of the virus to overwhelm our health authorities.” said Merkel in a press conference. “The virus punishes half-heartedness.”

Merkel pleaded with people in Germany to help achieve a “turnaround” in the fight against the worsening pandemic.

“We are dependent on the cooperation, acceptance and understanding of the people in our country for this to work. It's in everyone's own hands to make this November a joint success, a turnaround,” she told reporters in Berlin.

“We're a society with a large number of elderly people. And that's why as a society, together, we need to find the right answers.”

Germany has in recent days registered record numbers of new coronavirus infections, prompting a new round of restrictions in Europe's top economy.

Restaurants, bars and leisure facilities will be closed from November 2nd to November 30th.

Schools, daycares and shops will remain open, however, this month in what German media have dubbed a “lockdown light”, which contrasts with tougher stay-at-home orders in other European countries.

READ ALSO: What closes and what stays open during Germany's shutdown?

“If we succeed in slowing the spread of the virus then we will be able to create the preconditions for a bearable December,” Merkel said.

Looking ahead to the festive season, she ruled out any “lavish New Year's Eve parties”. But she held out hope that families would be allowed to celebrate Christmas together.

“It will be a Christmas under corona conditions but it should not be a lonely Christmas,” the veteran leader said.

Merkel suggested keeping the gatherings small and for people to consider going into “pre-quarantine for a few days” before meeting up with elderly relatives to reduce the risks.

“If we all behave very sensibly in November, we can allow ourselves more freedom over Christmas,” she added. “We have long weighed up whether there is a better or milder way. But we have not seen it,” she said. “That is why we have decided on these arrangements, with a heavy heart.”

Merkel explained that in many cases it was already impossible for health authorities to trace contacts after an infection is reported.

Germany had, therefore, to get back into a situation where authorities could trace contacts again, Merkel said. Otherwise exponential growth would continue to increase.

The number of coronavirus patients in intensive care has doubled from just over 1,000 people 10 days ago to just over 2,000 now, Merkel said.

The goal of the newest restrictions is to break the momentum of the outbreak.

Merkel referred to the current infection figures in Germany. The average number of Covid cases per 100,000 people in seven days is 127.8, she said. However, an incidence value of less than 50 per 100,000 inhabitants must be reached again.

“People are of course a little disappointed that it (the pandemic) has lasted so long,” said Merkel.

Autumn had come with great force, and the winter months were long,” she added. “The light at the end of the tunnel is still a long way off. I can understand the displeasure, but I must still campaign for acceptance because we have no other choice.”

Merkel said she believed in the power of reason and responsibility in a democracy, adding: “It is a test unlike anything we have experienced since the Second World War,” the Chancellor said.

“That means four weeks of giving up many things that make life beautiful,” added Merkel. Many people were careful in spring, she said, and this was how the pandemic was brought under control. “That will be more difficult in the winter months,” said Merkel – if only because there is a lot more going on indoors.

Merkel also asked for the understanding of restaurants, bars and other facilities which now have to close down because of the measures. “Nobody will be left alone with their loss of revenues,” she said.

The number of coronavirus patients in intensive care has doubled from just over 1,000 people 10 days ago to just over 2,000 now, Merkel said.

The goal of the newest restrictions is to break the momentum of the outbreak so that contact tracers can once again keep up with the chain of infections, she added.