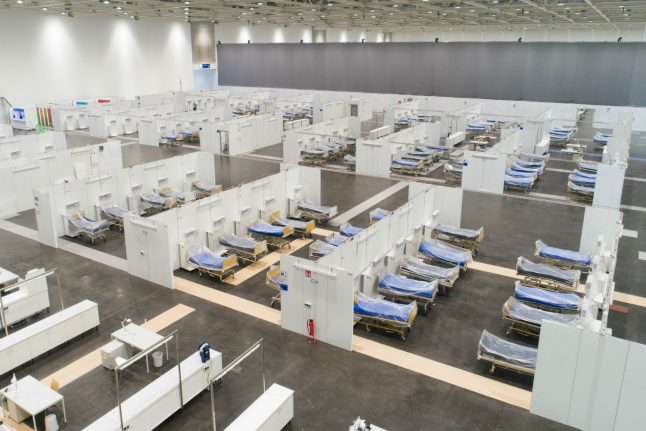 In October hospital beds were brought to Hanover's conference hall to accomodate the greowing number of patients. Photo: DPA

Germany will soon reach a new peak of intensive care patients receiving treatment during the coronavirus pandemic, according to Gerald Gaß, head of the German Hospital Association.

“In two to three weeks we’re going to exceed the level of intensive patients from April – and we can’t do anything to stop that anymore,” Gaß told Bild on Monday.

“Anyone who is admitted to hospital in three weeks is already infected today,” he added.

Gaß also announced that nursing staff from non-intensive medical areas would also be deployed in the intensive care units.

“That’s not optimal, but in such exceptional circumstances it’s necessary.”

As of October 31st, there were 21,682 occupied beds for intensive care coronavirus patients in Germany, and 7,539 available ones, according to Statista.

Uwe Janssens, president of the German Association for Intensive and Emergency Medicine (DIVI), told Bild am Sonntag, that “in some states there’s absolutely no more leeway”.

“Berlin only has 14 percent of its intensive beds free, and in Bremen its 17 percent,” said Janssens, adding that the current situation is more dramatic than what Germany saw in the spring.

To better cope with the growing demand for both hospital staff and supplies, Germany’s hospital commissioner Andreas Westerfellhaus called for non-urgent operations to be postponed.

“Many intensive caregivers are working to their limit, and they are, rightly so, warning that the situation will get worse,” Westerfellhaus told Bild.

“Only a set of measures will stop a catastrophe – for example, based on the circumstances conducting non-serious operations at a later date.”

“Unfortunately, the announced test strategy (of free tests for all health care workers) came too late,” she told Die Welt on Monday.

READ ALSO: Around Europe: How the relentless resurgence of coronavirus is causing unease and despair

With rising infection rates, it is now likely that more and more health workers are also unable to work, said Bas.

On Monday, the Robert Koch Institute (RKI) for disease control reported a drop in the number of cases, with just over 12,000 new infections within a day. However, the figure is often lower on Mondays as not all health authorities report their cases at weekends.

On Saturday, Germany recorded a record number of new infections, with more than 19,000 cases within 24 hours.

call for something – fordern