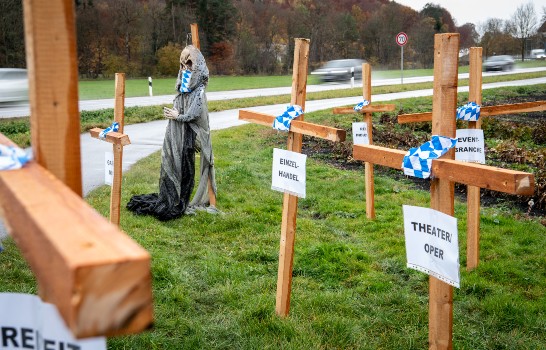 A protest in Bavaria against the cultural shutdown. Photo: DPA

It is “a slap”, said the 43-year-old of the tough curbs hitting the leisure, cultural and food and drink sectors from Monday until the end of November.

The pill was particularly bitter to swallow for the Munich-based opera, which had been holding performances in the cavernous concert hall for 500 spectators over the past month — and where no coronavirus infections had been detected.

MUST READ: 'Safer than supermarkets' – Could opera houses in Germany reopen at full capacity?

Director Nikolaus Bachler 69, said he did not understand why public transport and shops were able to keep going while the opera had to close.

“We have a disciplined public. It is possible to master the risks. It's not an adequate decision,” he told AFP.

His disappointment has been shared by colleagues in the entertainment sector.#

In an open letter, German actors, singers and humourists said: “These last months, we have the impression that we are worth less than cars, planes or footballers.”

Europe's biggest economy coped relatively well with the first coronavirus wave earlier in the year but numbers have risen rapidly in recent weeks, in step with the rest of the continent.

With infection rates hitting new 24-hour records almost daily over the past week, the government has decided that leisure, cultural and food and drink sectors must be shut to halt the surge in contagion.

From Monday, theatres, cinema,s swimming pools, and bars must shut.

Schools and shops can stay open. And professional sports can keep going, but only behind closed doors.

Industries hit by the curbs have hit out at what they feel is uneven treatment.

In a video that went viral, German jazz trumpeter Till Broenner said he was “angry” about the lack of support for the cultural sector.

Restrictions over the last months have put the livelihoods of 1.5 million people at risk, he said, noting that the culture and entertainment sector generates 130 billion euros in revenues.

Baritone Nagy stressed the artistes take the virus very seriously and back all measures necessary to fight it.

But he noted that the past month of shows without contagion had shown that shutting operas down completely might not be necessary.

For him, it was “a great opportunity” to have been able to perform the premiere hours before the new shutdown.

As one of the Bavarian State Opera's final shows before the new curbs, the 50-strong audience clapped with all their might, cheered at the top of their voices and stamped their feet repeatedly.

Spread out on the red cushioned seats in the hall with elegant balconies that usually seats up to 2,100, spectators were cheering the premiere of the opera “The Birds” by Walter Braunfels.

“It's completely depressing and painful to be sitting here in a hall that's so empty,” said Jan Brachmann, 48, with a bow-tie around his neck and a surgical mask covering his nose and mouth.

The opera afficionado said he wanted however to be at the premiere, out of respect “for the artistes who prepared it”.