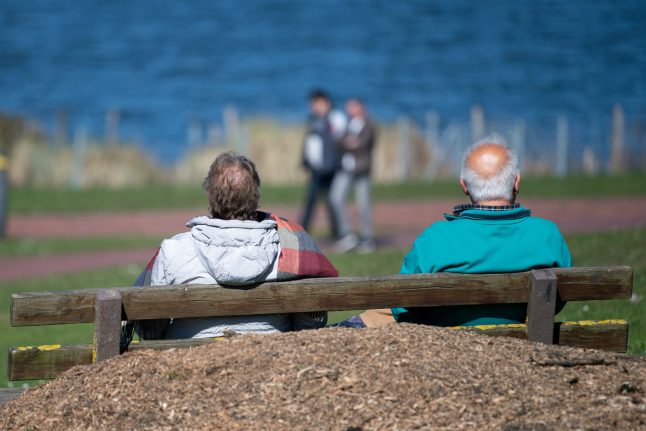 People sitting on a bench in Stuttgart. Photo: DPA

Are you allowed to meet people?

Yes. According to the new rules which will be in force from November 2nd to November 30th, you can meet in public with members of your own household and one other household. A maximum of 10 people can be present in the meeting in total.

Due to cafes, restaurants and other facilities being closed, you will have to meet people in public places such as parks or other green spaces.

If you are caught breaking the rules (for example if you meet with people from two different households) you could face sanctions, the government has warned.

What about in private?

There are recommendations not to meet with various people in private. But the rule on meeting in public has not been explicitly extended to the private sphere, perhaps over fears that would be deemed unconstitutional.

However some states are taking a clearer line on this. For example, in Bavaria the rule of two households and a max of 10 people also applies to private settings. And if authorities receive complaints of parties, people can face punishments.

So what does the official federal government and state agreement say?

“Groups of people celebrating in public places, in apartments as well as private areas are unacceptable in view of the serious situation in our country,” says the resolution agreed between Merkel and state leaders.

Are these the same rule as in spring?

No. At the height of the first wave in March and April, people were told they could only leave their homes for essential reasons such as shopping or exercise.

And only two people (excluding families or those from the same household) could meet outside in public. This was later extended so that two households could meet.

Also keep in mind schools and Kindergartens are remaining open this time, plus shops, but with tighter restrictions.

What message is Germany trying to get across, and why?

Merkel has repeatedly made clear how important it is for people in Germany to drastically reduce their social contacts.

The federal government and states reported that health authorities cannot trace infections in more than 75 percent of cases “so in order to avoid an acute national health emergency, it is now necessary “to considerably reduce contacts in the population as a whole and to reduce the number of new infections to the traceable level of less than 50 new infections per 100,000 inhabitants in one week”.

The government says without these restrictions, the “continued exponential growth in the number of infected people would inevitably lead to the overburdening of the health system within a few weeks and the number of serious courses of disease and deaths would increase significantly”.

In the document published after the meeting, the government and states said the aim was also so that people could meet with friends and family (with conditions) at Christmas. People in Tempelhof during the shutdown. Photo: DPA

“The federal government and the Länder (states) are aware that the restrictions are a great burden for the population,” the agreement says.

“Therefore, the vast majority of the population deserves great thanks to those who have so far and will continue to comply with these measures with public spirit and patience, and especially to those who are responsible for the practical implementation of the measures and, of course, to those in the health system.”

Readers question: Is there such a thing as a social or support bubble in Germany?

A reader contacted us to ask if people in Germany are allowed to get two households together one day, then a different household on another day – or if residents are being asked not to meet different sets of people.

In the UK and some other countries, the government has called for people to create bubbles, where you nominate one person or family and they are the only people you see socially.

In Germany, there is no strict mention of social bubbles. However authorities have urged people to cut down on social contact, among the other rules, and that would involve seeing only certain people regularly.

“Citizens will be encouraged to reduce contacts with people outside their own household to an absolute minimum,” says the government agreement.

People are being asked to stick to distance rules, wash hands, wear masks properly when 1.5m distance can't be maintained from others, download the coronavirus app and air rooms regularly.
“Most importantly, do exactly all of that,” Tobias Kurth, professor of public health and epidemiology at the Charité in Berlin told The Local recently. He added that people should try and reduce social contact “to a minimum and wear masks when possible – it will help the situation”.

The onus here is again on personal responsibility, urging people to make decisions based on the seriousness of the situation in Germany.

READ ALSO: Around Europe: The relentless resurgence of coronavirus causes unease and despair

What about if I work in an office?

The government has urgently called on firms to allow people to work from home again “wherever this is feasible” during the shutdown.

However, if people have to go to a workplace, employers “have a special responsibility to their employees to protect them from infections”, the government agreement states.

That means hygiene plans must be put in place that include rules on mask wearing and make sure there are not too many people in a closed room at one time.

Can my child play with friends?

What generally applies to adults naturally also applies to children, but it's more difficult since schools are open.

The aim is to bring the number of contacts down so you should avoid having lots of children over to play in your home for example during the entire month of November.

Although kids at schools and Kitas can play outside together in any number up until the age of 12 – they cannot do this in any composition: they must belong to a “joint care and teaching group”. So they will continue to have social contacts.

According to German newspaper the Tagesspiegel, however, the main aim of keeping schools and Kitas open is to avoid the economic damage caused by parents' possible loss of working hours.

And: if the infection situation worsens, schools or daycare centres may of course also be closed.

Playgrounds are not explicitly mentioned in the government resolution. This also applies to adult education centres and music schools. So there is a certain lack of clarity here so far. However, at least in the case of playgrounds, it can be assumed that they will remain open until further notice.

In Berlin, for example, the Senate has appealed to districts not to close playgrounds. The state has also expressly decided to keep music schools, adult education centres, youth art schools and library lending open. But here, too, the rules of distance and hygiene naturally apply.