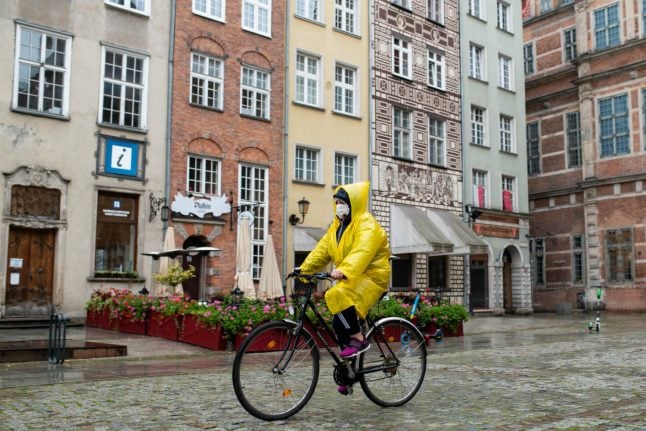 Gdańsk in Poland. The whole country is classed as a risk zone. Photo: DPA

The Robert Koch Institute (RKI) has significantly expanded its list of coronavirus risk areas in Europe.

On Thursday, the whole of Poland, all of Switzerland, all of Ireland and all of Liechtenstein were listed as risk zones. In Austria, eight out of nine federal states are now affected – only Carinthia is not considered a risk area.

Numerous Italian regions have also been newly classified as risk areas, including Tuscany and Lombardy, Sardinia and the autonomous province of Bolzano, i.e. South Tyrol.

The whole of the UK and Northern Ireland is also designated as a risk area, as is Gibraltar. There are also individual regions in Bulgaria, Estonia, Croatia, Sweden, Slovenia and Hungary.

Meanwhile, the Canary Islands is no longer considered a risk area.

The new list comes into force on Saturday October 24th at midnight.

Although the classification as a risk area by the RKI and the travel warnings issued by the Federal Foreign Office do not equal a travel ban, they are intended to have the greatest possible deterrent effect on tourists.

What happens when you return from a risk area?

The country is in the process of changing rules. They officially come into force as of November 8th but some areas are already implementing the changes.

The new rules mean that anyone returning to Germany from a risk zone has to go into a mandatory quarantine for 14 days. After five days the person affected can take a free coronavirus test and if it is negative, the quarantine period can be ended.

The implementation of this and the rules around it lies with the individual German states.
READ ALSO: What you need to know about changes to travel and quarantine rules in Germany

What does this mean for tourist travel?

The new government travel warnings mean all border areas to Germany except those in Denmark are on the risk list.

In Italy, several tourist destinations are affected including Rome, Milan, Venice, Tuscany and Sardinia. German holidaymakers who spend their autumn holidays there now have to be put in quarantine or be “freed” when they return – unless they go or fly home before Saturday.

Only a few European countries remain free of risk areas, including Greece and Cyprus.

The lifting of the travel warning for the Canary Islands should make tour operators particularly happy.

For them, the islands off the coast of Africa, with their warm climate all year round, are one of the high hopes for the winter season.

However, Germany's decision does not yet mean that people can now book their Christmas holiday under palm trees without any worries. The lifting of the travel warning for Corsica lasted just one week – so things change very quickly.