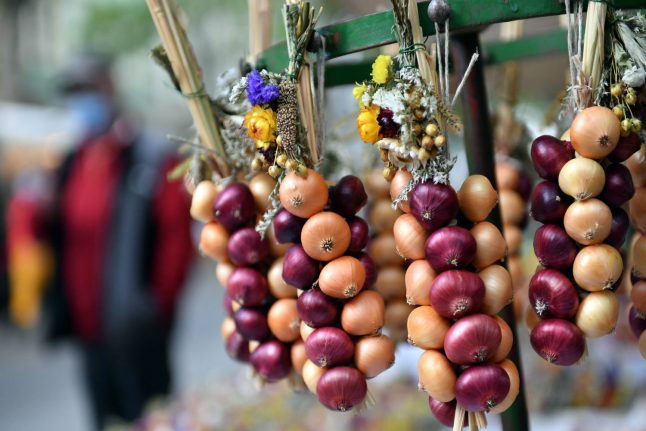 The Weimar 'Zwiebelmarkt' took place this October with over 75,000 participants.

Denglisch – a mix of Deutsch and English – is heard with growing frequency among Germans, especially in areas with a lot of young people. To express their approval, it’s typical to hear any German under 40 proclaim “Nice!” So it’s little surprise that the German youth word of the year was taken from English, as this Tweet points out.

According to the linguist quoted in the article, young people use words like Lost, the 2020 winner, to set themselves apart from the older generation. Sometimes they also just want to sound cool (which, by the way, is a word you’ll hear as often as its German equivalents of geil or genial).

Coronavirus cases around Germany are rising again, now with dozens of areas across the country declared risk zones with more than 50 infections per 100,000 residents over the last seven days.

In response, several of Germany’s 16 states have been enforcing their own bans, whether not allowing travellers from ‘hot spots’ to stay at hotels there or enforcing curfews for bars and restaurants.

Yet the rules are far from standard across the country, leading to what many have dubbed ‘corona chaos’, as residents are unsure what exactly applies to them.

Several states have issued emergency court orders against the new regulations, whether Saxony stating that the ban on accommodation no longer applies, or Berlin overturning its curfew on bars and restaurants after 11 pm.

In both cases, local courts ruled that such blanket bans go against the constitutional right of freedom of movement, and that outbreaks are more likely to occur at private gatherings or meat processing facilities. Germany has special seasons for all of its beloved fruits and vegetables, and the Zwiebel (onion) is no exception. Even in corona times, the 367th annual Zwiebelmarkt took place in Weimar, Thuringia with some 75,000 masked participants.

On the second weekend of every October, the festival sells nearly every type of onion to emerge from German soil, as well as a delicious array of treats, including the classic Zwiebelkuchen.

Sold throughout Germany every autumn with several regional variations, the core recipe usually consists of flour, butter, cheese, bacon and of course a hearty helping of the namesake root vegetable.

On October 15th, 1844, German philosopher Friedrich Nietzsche was born in Röcken, Saxony in former Prussia. His work would go on to have a profound impact on modern intellectual history through his explorations of ‘herd mentality’ and organised religion, among several other still timely-topics.

A true Wunderkind, Nietzsche was the youngest person to hold the Chair of Classical Philology at the University of Basel, at the age of 24.

Some of the world’s best known philosophers have come from Germany, including Martin Heidegger, Georg Wilhelm Friedrich Hegel and Karl Marx, just to name a few. The latter’s home city of Trier recently installed traffic lights with his cartoon figure lit up in green and red. Reader Chris Stewart, 26, wrote to us to share an experience he says has become typical for him living in Berlin: being discriminated against as a foreigner. Covid-19 has only exacerbated the problem, said the Canadian who has lived in the German capital for over four years.

He recalled the following incident this week:

“I tried calling my local doctor's office to ask if I could get an appointment for a COVID test done or to just have a doctor see me because I'm sick. They said, no, don't come to the office if I'm sick, it's too much of a risk… and that I should try calling the Berlin COVID Hotline.

So I did that…and waited on hold for 30 minutes before someone picked up.”

Yet when Stewart asked the doctor in German if he could speak slowly, “he said “Nein,” and hung up on me.

This is not the first time in my four years that a service employee has hung up on me rather than attempt to speak slowly.”

Have you faced similar encounters when dealing with German bureaucracy? We’d like to hear your experiences and frustrations for a future article.