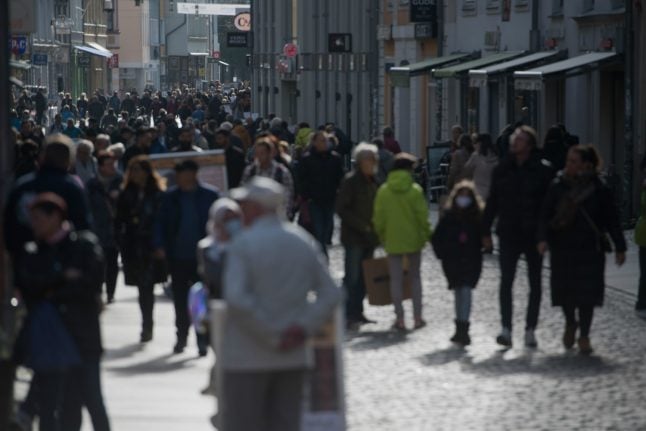 The new rules will affect most people in Germany. People walking in Stralsund, Mecklenburg-Western Pomerania on Thursday. Photo: DPA

The German government has released a document detailing how it plans to deal with the coronavirus pandemic in the colder months. It followed an eight-hour meeting between Chancellor Angela Merkel and the heads of the country's 16 states on Wednesday.

In the paper, the government thanked people living in Germany for sticking to Covid-19 restrictions, as well as health workers for their “great performance” in tracking, tracing and treating infections.

“Germany has coped well with the challenges of the SARS-Cov2 pandemic thanks to the committed cooperation of all social actors and, above all, the citizens,” the paper said.

“In recent weeks, however, the number of infections has risen again in large parts of Germany, particularly in some large cities and metropolitan regions.”

The government and states have agreed that the infection figures “must be kept low in autumn and winter” so that contact tracing and infection control “remains possible”, and vulnerable groups can be protected.

Authorities say they want to avoid another shutdown of schools and businesses “under all circumstances”.

Here's a round up of measures to be adapted in a bid to control the spread of Covid-19 in the country:

Germany is urging the public not to forget the basic rules of keeping distance with strangers, washing hands regularly, wearing a face mask, downloading the Coronavirus app and airing out rooms regularly.

The government and states “appeal to the citizens, especially in the autumn and winter months, to be very vigilant in ensuring that a minimum distance of 1.5 m is maintained, that hygiene rules are always observed and that, where necessary, a mouth-nose cover (everyday masks) is worn,” say authorities.

“In addition, it is strongly recommended that the corona warning app should be used and that regular ventilation should be provided if several people are staying in closed rooms.”

Authorities say these measures are “the essential basis for the successful containment of infections”. The slogan above which stands for distance, hygiene, everyday masks, app and ventilation. Source: German government

Essentially, Germany is adapting a tier system. Some restrictions will kick in when 35 new infections per 100,000 people in seven days is detected, with more to come if the situation doesn't improve.

Mouth and nose coverings are mandatory across Germany in areas such as on public transport, in shops and in some places in busy streets and offices.

The government has decided that if an area records more than 35 new infections per 100,000 people over seven days, masks will become mandatory in all places where people have close contact for an extended period.

“Unfortunately, the last few weeks have shown that celebrations in particular can spread infections among family and friends,” says the government document.

“All citizens are once again asked to critically weigh up in each individual case whether, how and to what extent private celebrations are necessary and justifiable in view of the occurrence of infection.”

If the number of infections reaches 35 per 100,000 people over seven days .the number of people allowed to gather will also be limited to 25 in public and 15 in private spaces.

Once 50 new infections per 100,000 is exceeded, even tougher restrictions will apply such as limits to 10 people or two households allowed to gather in private (more on tougher rules later).

Curfews on bars, restaurants and shops

Germany recommends introducing a curfew in the catering trade and additional controls in cases where the number of infections is continuously rising.

In general, where the number of cases reach 35 new infections per 100,000 residents in a week, the number of participants at events should be further limited, say Merkel and the state leaders.

Politicians acknowledge that the restrictions mean some sectors of the economy will be hit hard. The government intends to extend aid measures for companies and improve conditions.

As we touched on, when 50 new infections per 100,000 is exceeded, even tougher restrictions will apply.

These targeted measures could include:

– the closure of restaurants and shops after 11pm

“As provided for in the hotspot strategy, the states will consistently tighten local restriction measures at the latest as soon as the rate of infection rises above the limit of 50 new infections per 100,000 inhabitants within the last 7 days,” says the government document.

If the increase in the number of infections with these measures does not stop within 10 days, further targeted restriction steps “are unavoidable in order to further reduce public contacts”, says the document. In this case, stricter contact restrictions, such as only allowing five people or the members of two households to meet, will come into force.

This graphic by DPA gives an idea of what will be introduced from 35 cases per 100,000 people in seven days and at 50 cases. The government is urging people to avoid travel to and from parts of Germany with more than 50 new infections per 100,000 people within the last 7 days.

No agreement Germany-wide was reached on the highly controversial accommodation ban, which forbids those coming from coronavirus hotspots around the country from staying overnight at hotels.

A few German states have already exempted themselves from the ban. It will be reviewed and discussed at the end of the state's autumn school holidays on November 8th.

The government says protecting vulnerable groups most at risk of being seriously ill with coronavirus is a “particular challenge”.

However, the aim is not for “complete social isolation” of these groups.

A new strategy involving rapid tests will be introduced to facilities, such as nursing homes, with the aim of detecting outbreaks quickly and controlling them.

The new quarantine regulation for people coming from foreign risk areas is to be introduced in all states by November 8th. Some areas have already began introducing the rules.

Here's what will happen in future when you arrive from a risk area:

– A quarantine period of 10 days will apply to people entering the country from foreign risk area. There is the possibility of ending the quarantine by means of a negative coronavirus test that can only be taken from the fifth day at the earliest.

There will be exemptions for some people, such as commuters.

READ ALSO: What you need to know about changes to travel and quarantine rules in Germany

Hopes for vaccine and plans for research funding

“Given the progress in vaccine research, it is hoped that vaccines will be authorised and available next year,” said the government document.

Authorities say this could be a “decisive step towards the control of the pandemic and a return to normality”.

Germany said “substantial funds” have been made available for research, the increase of production capacities and the early availability of vaccines.

Merkel and the states also highlighted the importance of supporting local authorities so they could check that coronavirus rules, including quarantine orders, were being complied with. If states request it, extra police officers will be sent to help public order offices.

The army will also be drafted in to help with contact tracing when needed. “The Bundeswehr (German Army) is able to provide support with up to 5,000 forces and in a few weeks with up to 15,000 forces,” said the document.