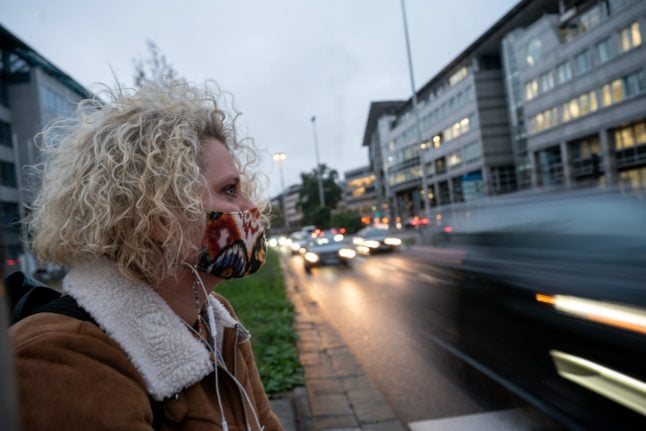 A woman wearing a mask in Stuttgart on Tuesday. Photo: DPA

The Robert Koch Institute (RKI) for disease control reported 5,132 new cases within 24 hours in Germany on Wednesday. That's more than 1,000 cases more than the day before when there were 4,122 infections logged.

The number of deaths from Covid-19 has also increased sharply in 24 hours – from 13 reported on Tuesday to 43 on Wednesday.

Germany, long seen as having managed the pandemic better than most European countries, is on heightened alert after the number of new daily cases spiked from 2,828 on Wednesday October 7th to just over 4,000 the following day. And on Saturday, 4,721 new cases were logged.

The latest numbers are as high as they were in mid-April. However, the figures are not comparable with each other, because more testing is being carried out now – and that means more infections are detected.

“Currently, an accelerated increase in transmissions in the population in Germany can be observed,” the RKI said in its recent situation reports. “Therefore, an urgent appeal is being made for the entire population to commit itself to infection control.”

READ ALSO: Why calls are growing for clearer rules across Germany amid coronavirus crisis

The graph below shows the development of new cases since the start of the epidemic in Germany. New cases are said to be connected to private celebrations with family and friends.

However, many smaller outbreaks are happening in nursing homes, hospitals, facilities for asylum seekers and refugees, community facilities, schools, in workplaces and in connection with religious events.

Hotspots include Berlin, particularly the district of Neukölln, and the district of Cloppenburg (Lower Saxony), where 89 cases are related to an outbreak among workers of a slaughterhouse.

In the district of Esslingen (Baden-Wüttemberg), a cargo centre has developed as a hotspot for the spread of SARS-CoV-2 in addition to private gatherings.

In the city of Hamm (North Rhine-Westphalia), more than 200 infections are associated with a wedding. And in the Wesermarsch district, the increase in incidence is directly related to outbreaks in childcare facilities and schools.

The below map by DPA shows the hotspots across Germany as of October 13th. Areas are classed as risk zones when more than 50 infections per 100,000 residents in the last seven days are detected. What's the situation in Germany's hospitals?

The proportion of Covid-19 cases is increasing slightly in the older population, experts warn. Older age groups are generally considered more susceptible to severe courses of the disease than younger people, and are more likely to require hospital treatment.

Although the number of coronavirus patients in intensive care units has increased noticeably in recent days, it is still comparatively low. According to data from the DIVI Intensive Care Register on Tuesday, around 620 Covid-19 patients received intensive care treatment, compared to around 450 a week earlier.

Importantly, there are still a total of almost 9,000 intensive care beds available in Germany.

At least 334,585 people in Germany have contracted the virus since the beginning of the crisis. The number of deaths stands at 9,677. The RKI estimates that about 281,900 people have recovered from Covid-19.

According to RKI estimates, the reproduction rate, or R-value for short, is 1.18 in Germany. This means that one person with Covid-19 infects on average slightly more than one other person. The R-value reflects the course of infection from about one and a half weeks earlier.

The RKI also gives a so-called seven-day R number in its current situation report. This value refers to a longer period of time and is therefore less subject to daily fluctuations. According to RKI estimates, this value was 1.20 on Tuesday (previous day: 1.25). It shows the infection rate from 8 to 16 days ago.