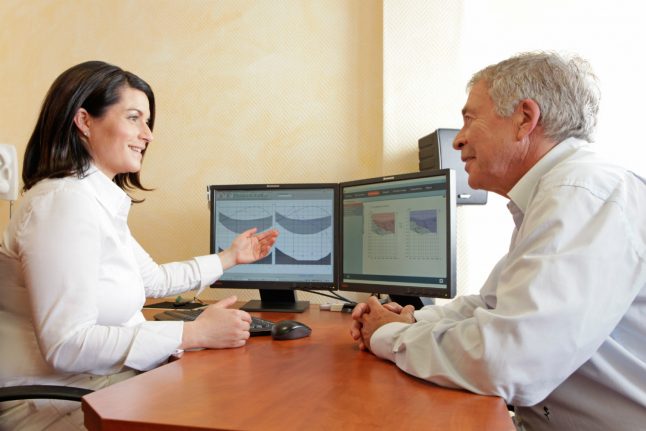 As part of the new Digital Healthcare Act, Health Minister Jens Spahn (CDU) has made it possible for some health applications – apps and web-based programmes – to be prescribed by doctors. And the costs are to be covered by the statutory health insurance (GKV) in what is thought to be a world first.

The health apps, which will be downloadable to phones or computers, are aimed at supporting patients, particularly with chronic diseases such as diabetes, high blood pressure or anxiety. The hope is also to have apps to support groups such as pregnant women.

On Tuesday the first apps were unveiled after they made it through the test procedure from the Federal Institute for Drugs and Medical Devices (BfArM). They are the Kalmeda app, which promises to help with tinnitus, and Velibra, a therapy programme for anxiety disorders.

Until now, apps have been largely excluded from regular health care treatment. However, this development opens up a market for the software industry, which mainly consists of start-ups.

READ ALSO: German health care – Everything that changes for patients in 2020

“Digital health applications are finally coming into mainstream use and will put health care in Germany on a completely new footing. A completely new market is opening up with new players,” said Diana Heinrichs, board member of the German Association for Digital Healthcare. The association was founded to represent the interests of manufacturers seeking a listing by the BfArM.

According to consulting company Research2Guidance, there are around 100,000 health apps in Google and Apple stores. But many of them are leisure or wellness applications such as pedometers or sleep aids. And most of the truly medical, paid apps are based on insecure business models.


Ralf Jahns, managing director of Research2Guidance, expects that this will change as a result of the statutory health insurance reimbursement.

“Numerous developers in Germany and abroad are showing interest in the opportunities that are now being created in Germany,” he said. “This would not only affect start-ups, but also large corporations, especially from the pharmaceutical industry, or hospital chains.” “Certainly, tech giants like Google and Co. will also discover the potential,” expects Jahns. And German start-ups would have the opportunity to become visible worldwide and become international players. Jahns estimates that “hundreds of health apps could make it into the public health insurance system in the medium term”.

But for that to happen there must be demand. A survey conducted by the Yougov polling institute for the Handelsblatt newspaper showed that only six per cent of respondents have used health apps so far. However, 59 percent could imagine doing so if their doctor prescribed them and the costs were covered.

READ ALSO: How German health care is set to become more digital in 2020

Which apps have been approved?

Although only two have been fully approved so far, a total of 27 applications for health insurance reimbursement have been received by BfArM. Uso Walter, founder of the start-up company Mynoise, was one of the first with the Kalmeda app. It aims to help patients suffering from tinnitus through behavioural therapy.


The app counteracts the “ringing in the ears” with a multi-level exercise programme. Patients receive an individual therapy plan, for example with aids to help them cope better with stressful situations. Relaxation and meditation exercises complete the offer.

The Innovation Office of the Federal Institute is also to hold advisory meetings with developers of 75 other apps. In total, the institute has received around 500 enquiries from manufacturers

How do apps qualify?

They have to demonstrate that the treatment process is effective within a year.  The effectiveness of Kalmeda, for example, will now be tested within the next 12 months in a study with 150 test patients.

However, the measures also attract criticism. “The rules as they are designed could create a gold-rush atmosphere,” fears Stefanie Stoff-Ahnis, board member of the GKV-Spitzenverband: “And that cannot be the point of healthcare.”

It also remains to be seen if doctors accept the apps and prescribe them.

Under the healthcare act, Germany wants to see more video appointments for patients plus electronic sick leave notice, and e-prescriptions, as well as improvements to IT systems for doctors and dentists.