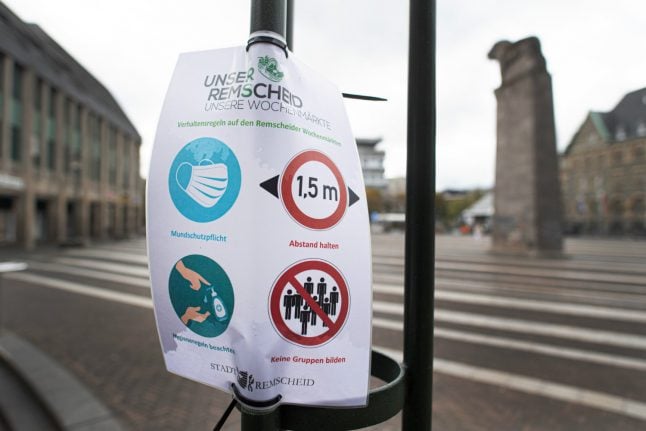 That number has previously twice exceeded the 2,500 threshold in recent days, prompting authorities to tighten measures and urge for more caution across the population.

According to the RKI, at least 294,395 people in Germany are confirmed to have contracted the Sars-CoV-2 virus since the beginning of the pandemic. A total of 9,508 people have died so far, with eight deaths reported in 24 hours.

Scientists estimate that around 259,500 people have survived the infection in Germany so far.

The peak in the number of new daily infections was more than 6,000 at the end of March/beginning of April. The number then fell and rose again in July. The amount of new cases detected also depends on how many people are tested.

Rise in number of people in Germany in intensive care

There's also been an increase in the number of Covid-19 patients receiving intensive care.

According to the current RKI situation report, 362 coronavirus patients are currently being treated in intensive care units, while 193 of them are receiving ventilation.

READ ALSO: These are the countries and regions on Germany's 'high risk' quarantine list

What else is important to know?

The RKI said the seven-day incidence exceeded 50 cases per 100,000 people in four districts in Germany (as of October 1st): the cities of Hamm and Remscheid in North Rhine-Westphalia (NRW), the district of Berlin Mitte and Rhön-Grabfeld in Bavaria.

In a further 38 districts, it exceeded 25 cases per 100,000 inhabitants. A total of eight districts transmitted zero cases over the past seven days.

Heath experts said the proportion of deaths among Covid-19 cases “has been consistently below one percent” and that is much lower than spring, particularly in April.

“It is unlikely that the virus has changed to become less pathogenic,” said the RKI when explaining the lower death rate.  “Rather, the low proportion of deaths can be explained as follows: on the one hand, recent infections have occurred mainly among young people, who rarely experience a severe course of disease.

“On the other hand there is also broader testing, which means more milder cases are identified. Additionally, as the number of cases increases, the true proportion of severe courses of disease and deaths only becomes apparent some time after diagnosis.”

READ ALSO: 'Stricter rules than other parts of Germany': These are Berlin's new coronavirus rules

The RKI said if the trend continues and more elderly and vulnerable people become infected with the virus, an increase in hospitalisations and deaths should be expected.

They say the situation should be monitored closely.

What about the R number?

According to RKI estimates, the reproduction number, or R-value for short, was 0.90 in Germany according to Thursday's situation report (previous day: 0.96).

This means that a person with coronavirus infects on average slightly less than one other person. The R-value reflects the course of infection about one and a half weeks before.

The RKI also gives a so-called seven-day R in its current situation report. This value refers to a longer period of time and is therefore less subject to daily fluctuations.

According to RKI estimates, this value was 1.05 on Thursday (previous day: 1.00). It shows the infection rate from eight to 16 days ago.

Experts want to keep the number at or below one as much as possible.