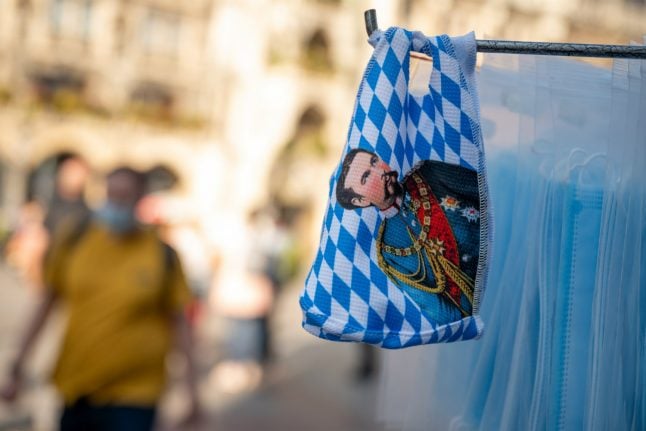 Face masks are now mandatory in some outdoor spots in Munich. Photo: DPA

Restrictions are being put in place in Munich and some other parts of Bavaria – the German state hit hardest in the coronavirus crisis.

People in the Bavarian capital have to wear face masks in some parts of the city centre from 9am to 11pm. The obligation is in place until at least October 2nd.

Here's where mouth and nose coverings are mandatory: in the Old Town pedestrian zone including Schützenstraße, Stachus and Marienplatz, Sendlinger Straße including Sendlinger-Tor-Platz, and at Viktualienmarkt.

There are signs at the entrances to the areas to show when people have to wear masks. Some people are excluded from wearing them, including children under six and those who can't wear a covering for health reasons.

Police will enforce the measures, authorities said. Those caught not wearing a mask face a €250 fine.

From September 24th up to and including October 1st, people in Munich are only allowed to be in private and public spaces, such as outdoors or inn restaurants, with members of their own household, close relatives or in groups of up to five people from different households (previously meetings with 10 people was allowed).

Private celebrations, such as weddings, funerals, birthdays, school graduation ceremonies, and non-public events are generally only allowed with up to 25 people (previously 100) indoors or up to 50 participants (previously 200) outside. The organiser has to draw up a protection and hygiene plan.

Ban on selling and consuming alcohol in hotspots

In addition, as on previous weekends, from Friday evening to Sunday morning there will be a ban on alcohol for takeaway sales from 9pm and for consumption in public places from 11pm to 6am at the well-known hotspots Baldeplatz, Gärtnerplatz, Gerner Brücke, Wedekindplatz and at the Isar river area between Reichenbachbrücke and Wittelsbacherbrücke.

The fine for illegal alcohol consumption is at least €150. Any retailer who violates the ban on sales at hotspots after 9pm could be hit a fine of at least €500 depending on the situation and behaviour as well as in case of recurrence, the fine may be higher, authorities said.

Despite the restrictions coming in there is good news: the seven-day value in Munich has fallen below the threshold of 50 new infections per 100,000 inhabitants. It's now 45.1, as reported on Thursday by the the State Office for Health and Food Safety (LGL).

It was previously over 50 so measures were put in place.

Where else is affected?

The district of Dingolfing-Landau, north east of Munich, has one of the highest seven-day incidence rates in Germany due to an outbreak at the BMW plant there.

Strict rules are in force in this district until at least October 2nd to contain the further spread of the virus.

A maximum of five people from different households are allowed to meet in public spaces and restaurants, as well as in private.

Meanwhile, until further notice, the number of people at weddings, funerals or other gatherings will be limited to 100 people outdoors and 50 people indoors.

And pupils in most schools in the district have to wear a mouth and nose covering during lessons. Exceptions are made in some instances, such as for primary school age children.

Restaurants and other eateries have to shut by 11pm, while patients in hospitals and old people's homes can only be visited by one person per day from now on.

Nearly 40 employees have tested positive for the virus.

The district was already a nationwide hotspot in the summer due to a coronavirus outbreak on a vegetable farm and in a cannery in the municipality of Mamming, which resulted in around 250 infections among harvest workers.

Across Germany, only Hamm (96) and Remscheid (71.2) in North Rhine-Westphalia have higher rates than the Lower Bavarian district.

At midnight on Thursday, the RKI reported a value of 64.4, which is the highest number of newly infected people per 100,000 inhabitants in the whole of Bavaria in the last seven days.

What's the state of play across Germany?

The number of new infections within 24 hours across Germany was 2,153, the RKI reported on Friday.

At least 280,223 people in Germany have contracted coronavirus since the start of the outbreak and around 9,443 people have died, with 15 deaths within 24 hours.

According to RKI estimates, around 248,500 people have survived the infection. The number of active cases is therefore currently around 22,300.

According to research by German newspaper Zeit, which is based on the data provided by districts, 12,317 people have been infected with coronavirus in the last seven days.