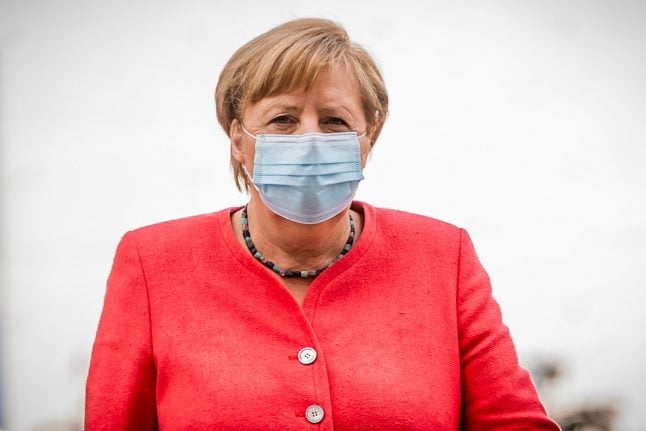 Angela Merke's approval ratings have gone up during the crisis. Photo: DPA

On Tuesday UK Prime Minister Boris Johnson was asked by opposition Labour MP Ben Bradshaw if “the reason Germany and Italy have far lower Covid rates than us” is because their contact tracing and testing programmes work.

Johnson rejected the argument, adding: “Actually there is an important difference between our country and many other countries around the world, that is that our country is a freedom-loving country.

What an amazing answer from Johnson. Asked why the UK's Covid infection rate is worse than Germany and Italy he says it's because we're a “freedom loving country” pic.twitter.com/vbOFSzgpfM

“If you look at the history of this country over the last 300 years, virtually every advance from free speech to democracy has come from this country.

“And it is very difficult to ask the British population uniformly to obey guidelines in the way that it is necessary.”

What a complete and utter plonker the UK’s PM is. https://t.co/XklItKgDOY

It's really offensive and unacceptable saying that Germany and Italy are doing better because we hate freedom. We are 2 really free countries. At least, we are not thinking to put the military in the streets.

Love, a German married to an Italian.

Well done to @BorisJohnson for insulting Germany, Italy and every other free and democratic country in the world.
Lots of which have a functioning Test & Trace system.

Johnson's words however did prompt many to ask why Germany has fared better than the UK during the crisis so far. And it's nothing to do with how much freedom is valued by citizens in either country.

What do the numbers say?

The population of the UK is around 66.6 million while around 83 million people live in Germany. There have been around 404,000 confirmed coronavirus cases in the UK since the pandemic began, with around 41,825 deaths as of Wednesday September 23rd.

What about new cases and measures?

Johnson tightened coronavirus measures on Tuesday. Under new rules, shop staff will have to wear face masks and weddings will be limited to a maximum of 15 people.

Fines for breaking laws on gatherings and not wearing a mask will increase to £200 for a first offence.

He also warned “significantly greater restrictions” could come if necessary.

Johnson said “similar steps” would be taken across the UK after he met with the leaders of Scotland, Wales and Northern Ireland on Tuesday morning.

Germany has also raised concerns about the number of rising cases this summer and there have been some local lockdowns put in place to control the spread. Unlike in in the UK these local lockdowns have proved effective at limited the spread of the virus.

In Munich, coronavirus measures are being tightened. From Thursday face masks will have to be worn in more public places and new contact restrictions come into force.

But unlike in the UK there hasn't been the same level of alarm around the rise in cases. That's perhaps linked to the fact Germany managed to deal with the first wave of the virus in spring without the same kind of death toll seen in the UK and other countries.

Authorities will be confident that any second wave can also be managed.

What has Germany got right?

Germany’s success with getting its testing system up and running was down to several factors.

Firstly, it acted quickly when the first coronavirus cluster emerged in the country back in January.

With contact tracing and quick-fire testing to isolate the outbreak at an early stage, experts believe it bought the country time and helped the health system prepare for the next stages.

The example set in Bavaria was copied throughout Germany as infections spread to all 16 states.

It was exactly the kind of procedure recommended by the World Health Organisation (WHO), which other European countries, like the UK, struggled to put in place and only began to roll out once lockdowns were eased in May and June.

Although Germany's testing strategy has changed and adapted throughout the crisis – for example; now people returning from high risk regions have to be tested – Germany's message has remained consistent: trace and isolate everyone affected.

And not everything has come down to policy. One of the reasons Germany was able to dramatically up its testing regime was that it could rely on its strong pharmaceutical industry.

In contrast in the UK critics have blasted the test and trace system, which has been contracted out to private firms. The leader of the main opposition party said it was “close to collapse”.
It has seen people forced to drive tens of miles to be tested, or simply told there are no slots, whilst officials have found contacts hard to trace. Laboratories are struggling to process results.

Now the dust has settled, debates have started on whether the coronavirus shutdown in Germany, though less severe than other European countries like Italy, France and Spain, was too tough.

However, it has been credited for saving lives and the German government also used it to bolster its health system.

All across Germany, hospitals have expanded their intensive care capacities.

By mid-March, when the country counted slightly more than 11,000 confirmed cases and 27 deaths, it announced a plan to double its hospital beds with respiratory care capacity to around 40,000.

They set aside enough space to not only accept severely ill patients from Germany, but also coronavirus patients from neighbouring EU countries when their own hospitals lacked capacity and supplies.

Trust in the government

After Johnson's comments, many argued it's unfair to say that Germans would take freedom less seriously than the UK.

However, one reason that coronavirus measures might appear to be taken more seriously in Germany could be down to a high trust in the government.

In contrast, Boris Johnson's government and its message to the public to follow the rules was judged to have been greatly undermined by the scandal involving advisor Dominic Cummings, who was found to have flouted lockdown rules by driving 300 miles when he was meant to be confined at home.

When Merkel, a trained scientist, made a television address in mid-March urging people in Germany to listen to the new restrictions, people noticeably sat up and listened. She has been praised for communicating clearly and calmly and throughout the crisis.

Merkel has stepped back from the public eye on coronavirus matters since the situation has calmed down somewhat, but she returns for press conferences when there are rule changes.

The restrictions like social distancing and wearing face masks, which have been crucial to slowing the spread of the pandemic, have on the whole been met with little political opposition and are broadly followed.

Although it should be noted that there is a loud movement of anti-coronavirus measures protesters. Plus there's been worries about people ignoring rules in Germany, like in other countries, so the picture is not black and white.

While the rules and restrictions in place in Germany have been deemed to be clear and easy to follow overall, the UK government has been accused of sending mixed and confused messages to the public – at one point workers were urged to go back to work, before being told to continue working from home. Punishments for those who flout rules

Germany has strict punishments for those who flout rules. Violation of a quarantine order could in extreme cases result in a maximum prison sentence of up to two years or a steep fine.

There are also fines for those who don't wear face masks on public transport.

READ ALSO: What you need to know about Germany's quarantine rules for arrivals

The use of fines has been credited in countries like Germany and Italy with helping to enforce the rules, where as the police in the UK have preferred to use powers of communication to encourage the respect of the rules.

Some have said Germany's federal system, which allows each of the 16 states to make their own decisions, has helped the country to deal with the crisis more smoothly because it means hyper local lockdowns or measures can occur more easily.

In contrast, the UK has a more centralised approach, although the UK's countries have differed on some points on how they manage things.

What does it come down to?

In the handling of the crisis right now, the UK government appears to be motivated by the stinging criticism it took for failing to act quickly enough in March.

There's no such criticism in Germany which might allow authorities to act with clearer heads and make the right decisions.