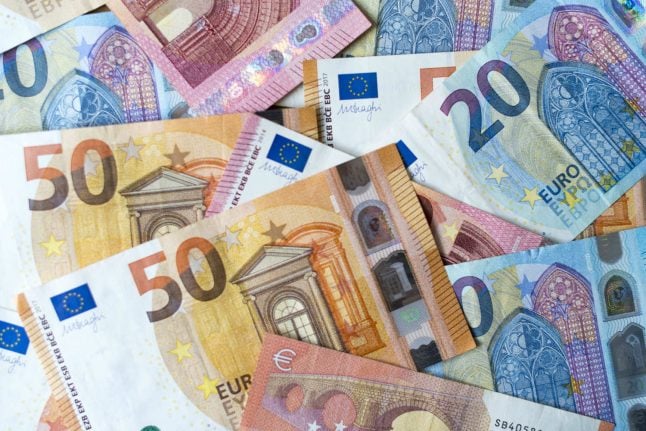 The figure will be formally announced on Wednesday when Finance Minister Olaf Scholz presents next year's federal budget.

Berlin already intends to borrow around €218 billion this year to help pay for massive stimulus and rescue measures aimed at steering Europe's top economy through the Covid-19 crisis.

A Finance Ministry source told news agency DPA: “Doing nothing would be much more expensive.”

Introduced at the height of the financial crisis in 2009, the “debt brake” bans Berlin from taking on more than 0.35 percent of gross domestic product (GDP) in new debt in any one year.

Scholz's 2021 budget would see total government debt as a percentage of GDP climb to 75.25 percent, compared with just under 60 percent in 2019.

Germany expects to return to the “debt brake” and its usual fiscal rigour in 2022, the ministry sources said.

The government is also bracing for a massive drop in tax revenues this year and next.

Tax revenues are not expected to reach their pre-crisis level until 2024, the sources said.

Support for people and businesses

Merkel's ruling coalition has pledged more than a trillion euros in aid to shield German companies and workers from the virus fallout, including through loans, grants and subsidised shorter-hours programmes.

The government has also rolled out a €130-billion stimulus programme to kickstart the economic recovery, including major investments in the health sector.

The German economy is predicted to contract by 5.8 percent in 2020, the deepest slump in its post-war history, before rebounding by 4.4 percent in 2021.

Wait, we have longer to file our tax returns?

Yes, that’s right. Due to the Covid pandemic, the German government has extended the deadline for submitting the 2021 tax return.

In ordinary times, people with a tax consultant are given until the end of the next year to file their return, while people who file it themselves are given until July 31st the following year.

However, people have been given extra leeway to file their tax returns since the start of the pandemic in 2020.

The law was voted through on Thursday with a large majority of MPs from the traffic coalition of the Social Democrats (SPD), Greens and Free Democrats (FDP) and also had the support of the opposition CDU/CSU.

The far-left Die Linke and the far-right Alternative for Germany (AfD) parties both abstained.

On Thursday, the Bundestag also voted through a number of tax relief measures, which are intended to support households and businesses who were hit hard by the Covid crisis in 2021.

They include a €5 per day allowance for those who had to work from home and new ways for companies to write off profits from 2021 against losses they suffered the year before.

Health and care workers are also set to benefit from the tax relief measures. Any bonuses received for working through the pandemic will be tax-free up to €4,500.

This is the second round of tax relief measures that the government has pushed through in as many weeks.

They also voted to increase the amount of expenses automatically written off by the Finanzamt in 2022. This has gone up by €200 to €1,200.

Meanwhile, people who commute long distances to work will now be able to write off an extra three cents per kilometre in their tax return. Under the revised commuter allowance, people who travel more than 21km to work can write off 38 cents for every kilometre over this distance.

The government expects tax losses of €235 million this year as a result of the latest tax relief measures alone – and it estimates that, by 2026, the treasury will be down more than €11 billion.