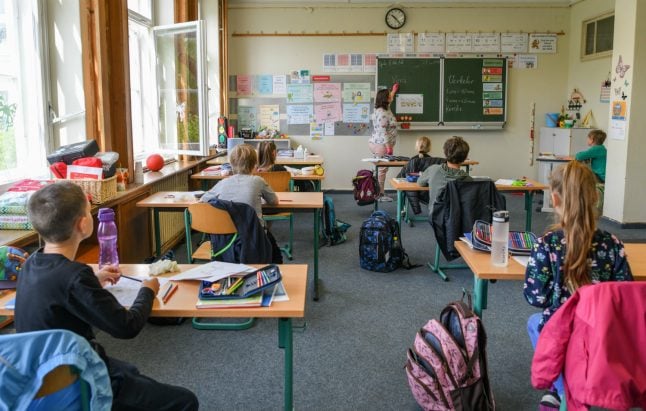 A school in Brandenburg in April. Photo: DPA

Germany is comparatively well positioned internationally when it comes to its education system. But the weeks of school closures could have massive financial consequences in the long-term for the generation of students affected.

That's according to the Organization for Economic Cooperation and Development (OECD) and its Director of Education, Andreas Schleicher.

READ ALSO: 'Room for improvement': How Germany's schools compare to the rest of Europe

During the presentation of the annual OECD report 'Education at a Glance' in Berlin on Tuesday, Schliecher spelled out the possible long-term impact of the shutdown.

“The education losses during school closures (…) could mean a three percent drop in life income for the corona generation and add up to hundreds of billions of euros in losses by the end of the century,” he said.

According to the report, schools in Germany were “effectively closed for 17 weeks in one form or another” until the end of June. The average length of closures in OECD countries was 14 weeks.

School and daycare centres were first closed in Germany in March during the peak of the crisis.

Stefanie Hubig, head of the Conference of Education Ministers and education minister of Rhineland-Palatinate, said closing schools and daycare centres again must be a last resort. “They must remain open,” she said, adding that distance learning can't replace classrooms.

The report adds: “If a second wave of infection were to lead to another lockdown, the situation would be even worse, and the education sector would not be spared.”

The more than 500-page-long study compares education systems among OECD countries. Among other things, it examines how much countries spend on education and how schools and daycare centers are staffed.

Overall, Germany's education system receives good marks in the report. Vocational training is highlighted as a plus point.

This system ensures a high level of employability and will play a key role in the recovery phase after the coronavirus crisis, it says.

According to the report, 88 percent of 25 to 34-year-olds with a vocational qualification were in employment in 2019. The employment rate was just as high as for peers with a university or other degree.

The real strength in Germany is the dynamic between school and company learning, said the OECD's Schleicher. According to the report, on average 46 percent of all students in the upper grades in Germany opt for a vocational training path.


Achim Dercks, Managing Director of the Association of German Chambers of Industry and Commerce, said that in the pandemic, vocational training had proved to be an important anchor of stability.

“From the point of view of the business community, it is now important to further develop the successful model of vocational education and training in a way that is future-proof,” he said.

This includes making sure there is modern equipment at vocational schools, he added.

Joachim Maiß, chairman of the Federal Association of Teachers for Vocational Education and Training, referred to a “blatant lack of teachers” at vocational schools. “The dual training must be moved further into the focus, its attractiveness must be emphasized,” he said.

Although vocational training is being praised, the situation on the training market is suffering because of the pandemic. The supply of apprenticeships has recently declined, while the number of applicants has also fallen.

German spending on pupils 'higher than most other countries'

The report also looks at how much the country spends on education.

In Germany, the ratio of education spending to gross domestic product (GDP) is below the OECD average. According to the report, Germany will spend 4.2 percent of GDP on education in 2017 (OECD average 4.9).

However, the per capita expenditure per student was higher than in most other countries: a total of $13,529 each (OECD average $11,231).

Germany also receives positive marks for early childhood education: in Germany, there are five children for every teacher in this field, compared to the average of seven children in OECD countries.