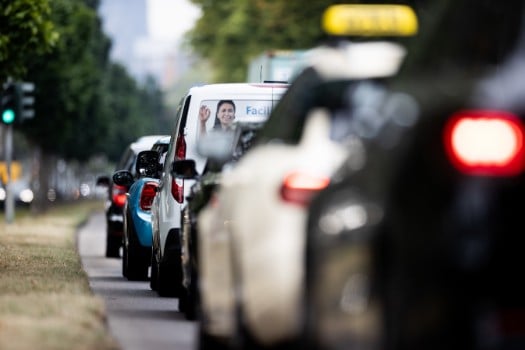 The German Association of Cities and Towns has spoken out in favour of a “traffic transition” with a significantly reduced role for the car.

Chief Executive Officer Helmut Dedy had told the dpa: “It won't be a traffic transition if we replace every combustion engine with an electric car.”

MUST READ: Demand for new cars in Germany falls during pandemic

It is a matter of taking public spaces away from the car, he said. “Our cities are not parking lots, cities are places to live. They are cities for people and not cities for cars.”

The future should be about moving to a different mix of modes of transportation in which the car plays a lesser role, Dedy argued.

But the proposal has met furious resistance from Germany's car club, the ADAC.

“This demand only strengthens differences between people and ignores the mobility reality of many people who depend on a car – even in cities and their surrounding areas,” ADAC traffic president Gerhard Hillebrand told the German Press Agency.

In the view of the FDP, such restrictions would curtail individual mobility and property rights and become a “deathblow” for the urban retail trade. Hillebrand said that it is undisputed that most cities are facing major challenges caused by road traffic.

“The number of inhabitants and commuter flows are growing, but the area in the inner cities cannot. For some time now, as traffic flows have been growing, there have been increasing conflicts in the distribution of scarce transport space in cities. There is therefore a need for action,” says Hillebrand.

“The idea that cars can simply be taken away from the space they occupy which would then be allocated to other road users – that's too simple for me. Opposing each other is not going to get us anywhere and will not meet the mobility needs of many people,” said Hillebrand.

The FDP also believe that pushing cars out of cities sends the wrong signal.

Oliver Luksic, transport policy spokesman for the FDP faction in the Bundestag, said on Saturday: “This would curtail individual mobility and property rights and could also be the death knell for urban retailers.”

The German Association of Cities and Towns, he said, fails to recognize that having one's own car is indispensable to many people, especially during the corona pandemic.

“Instead of discussions about bans, we need clever innovations in the field of digital networking and traffic control to equalize traffic in cities,” said Luksic.