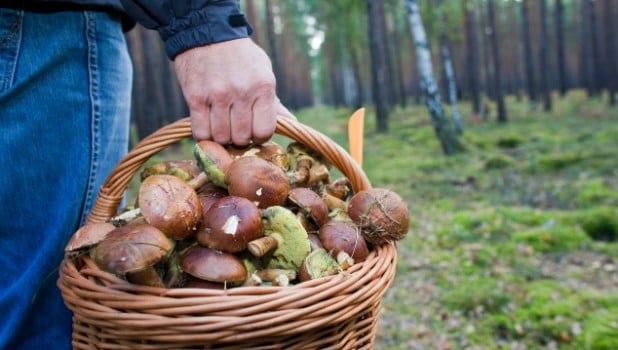 Suddenly he spots the hand of a corpse or human bones under some leaves. Cut to the next scene: flashing blue lights, barrier tape, detectives in protective suits searching for evidence.

MUST READ: Why this autumn could be a bumper mushroom hunting season

In reality, some criminal cases also begin in this way.

Some of them, like the case of Peggy in Bavaria or the series of child murders by the “Masked Man” in northern Germany, make national headlines.

This creates the impression that someone regularly stumbles over a corpse in the woods. But is this true? And what does such a find mean for criminologists?

On Tuesday, the trial of the murder of a 27-year-old whose body was found by a mushroom picker in a forest just over a year ago will begin in Nuremberg.

Investigators soon arrested a suspect and later his mistress – and, according to the public prosecutor, prevented another murder. According to the lovers' plans, the husband of the 32-year-old was also supposed to die.

Responsible for the case was the police headquarters of Middle Franconia. Due to the vast forests in the region, dead people are found on a regular basis.

But there are only a few homicides among them, says policeman Michael Petzold. And if they are killed, then the victims were usually murdered somewhere else and later dropped in the forest. “Only a few murders happen in the forest,” he says.

For the criminologists, a corpse in the forest is a challenge. “Due to the weather – rain, sun, wind – traces are lost”, says Petzold. Moreover, human remains lie there, sometimes for years, sometimes even decades. Animals tamper with the body, which makes the search for the identity of the victim, and the cause and time of death more difficult.

Nevertheless: “For me as a criminologist, finding the body is a stroke of luck, because it opens up a whole new range of new possibilities for research and searches,” says profiler Axel Petermann.

“Depending on the condition of the corpse, it can be clarified how and when the person died. DNA from the perpetrator can be secured on the body, the murder weapon can be determined and, if necessary, the course of the crime can be reconstructed,” he says.

Petermann was a murder investigator in Bremen for many years. He remembers several missing persons cases where he and his colleagues assumed that there had been homicides, but searched in vain for the victims.

Mushroom pickers, walkers or hunters then found them by chance in nature. Just as with the schoolgirl Adelina from Bremen, who went missing for months in 2001.

After the body was found, the investigators were able to clarify how the girl died. To this day they have not found her killer.

But at least the family of Adelina got certainty. It was similar with the nine-year-old Peggy, who also disappeared in 2001 in Lichtenberg, Bavaria, on her way home from school.

15 years later, mushroom pickers found parts of her skeleton in a forest. The Investigation of a suspect is still ongoing.

In the case of Maria Baumer, who was killed and whose skeleton was found by mushroom pickers in the autumn of 2013, the breakthrough came years later: Using new technical methods, experts detected drug residues on the victim's clothing and hair. Her former fiancé is currently on trial in Regensburg.

Decision made under pressure

The question remains of why criminals choose the forest to hide corpses or murder weapons.

“If you have to make a decision under time pressure, you usually do it from the gut,” says Thomas Bliesener of the Criminological Research Institute of Lower Saxony.

The forest is obvious. “As a location it is relatively well known from crime novels or real cases,” he says.

Axel Petermann can well understand that crime writers love the forest as a place for their plot. He himself writes books and advises the makers of the Bremen “Tatort” crime thriller.

“This location also has a great appeal for me,” he says. You can describe the untouched nature and the mood of the unsuspecting walkers or mushroom pickers and then set it in contrast to the discovery of the body, he says. That creates tension and horror.