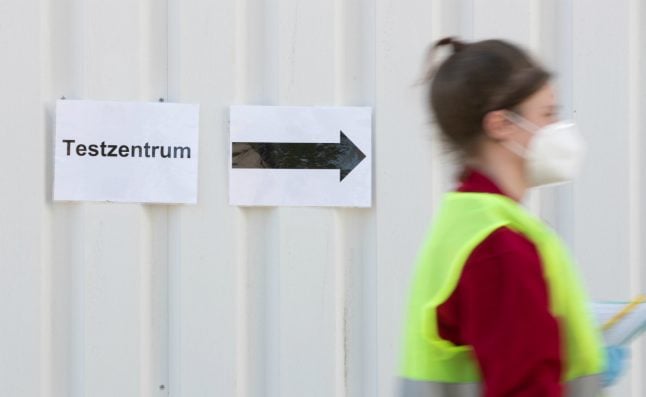 A sign for a Covid test centre in Bielefeld, North Rhine-Westphalia. Photo: DPA

Germany will impose tougher rules on mask wearing and keep fans out of stadiums until at the least the end of the year to combat a worrying rise in coronavirus infections.

Chancellor Angela Merkel met with the leaders of Germany's 16 federal states on Thursday for the first time since June to officially agree the new measures, which will apply nationwide, however there are some small regional differences.

Here's a rundown of the proposed new rules so far:

There's set to be a minimum fine of €50 for flouting requirements on mask wearing.

Until now each German state has set its own fines with penalties varying wildly, from €40 in Hamburg to €250 in Bavaria.

As part of the measures to stall the spread of the virus, people in Germany must wear a covering over their face and mouth when riding on public transport and in certain closed areas such as shops.

Germany also plans to extend a ban on large events from the end of October until December 31st 2020. It applies to everything from festivals and concerts to large sporting events with spectators.

The decision deals a blow to German football clubs which had been hoping to invite supporters back to their games this autumn.

Exceptions can be made in regions with very low infection rates if it is ensured that participants come exclusively from this region or from surrounding regions with similarly low rates.

– Limits on number of people at private gatherings

German authorities also plan to tighten rules on smaller gatherings by asking people to have as few participants as possible. Originally the government wanted to impose a limit of 25 people at private parties.

“Unfortunately, the last few weeks have shown that celebrations in particular can spread infections among family or friends,” the draft resolution states. The limit of 25 participants should apply to meetings “in privately used rooms and in privately used properties”.

However, Merkel said this topic will be looked at again in the coming weeks.

READ ALSO: This is where people in Germany are becoming infected with coronavirus

However, this point could cause some contention among the 16 states. Mecklenburg-Western Pomerania's state premier Manuela Schwesig spoke out against a nationwide uniform rule for family celebrations.

“I will definitely not go along with this,” she said on Thursday morning on Deutschlandfunk radio. She said the local infection situation should be a factor.

The draft agreement strongly encourages people in Germany “to limit the number of people they come into contact with”, to keep a distance of 1.5 metres whenever possible and to opt for outdoor gatherings instead of indoor ones.

– Scrapping free tests for some travellers

Germany earlier this month introduced free mandatory tests for travellers returning from high-risk areas and free voluntary tests for those coming back from elsewhere.

But following criticism that German labs were becoming overburdened, the draft document says it will scrap the free tests for those returning from non-risk areas from September 15th.

Returnees from risk areas will have to go into quarantine and will not be allowed to take a test before the fifth day after their return.

The quarantine can be ended after a negative result of this test. Bavaria will continue to provide free tests, also for returnees from non-risk areas, until at least October 1st.

Health Minister Jens Spahn had called for this mandatory tests to be scrapped after summer, with a focus on quarantine instead.

The government is also set to examine whether people returning from travel should pay for the test themselves.

Merkel called on people in Germany not to travel to risk areas if they could avoid it.

“We have decided today, and this is new, to call for travel to designated risk areas to be avoided wherever possible,” Merkel said.

Why are the rules being tightened?

Although Germany has weathered the pandemic well so far, the recent rise in coronavirus cases “must be taken very seriously”, the draft agreement states.

“The goal of the federal government and the states is to work together to reduce the infection numbers as much as possible.”

As in other countries, the upsurge of the past weeks has been mainly blamed on summer travel and private gatherings.

Germany on Thursday reported 1,507 new coronavirus cases, bringing the total to 237,936, according to the Robert Koch disease control institute.

The Bundesrepublik has so far recorded 9,285 deaths.