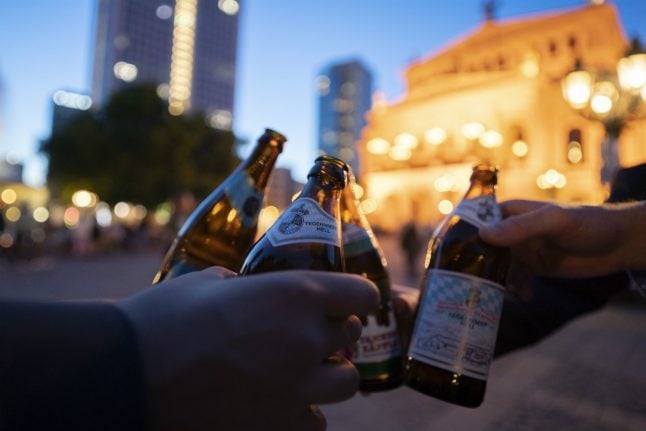 People having beers in the centre of Frankfurt am Main on Sunday night. Photo: DPA

Germany is seeing a rise in the number of confirmed coronavirus cases and it's causing concern all round.

According to data from the Robert Koch Institute (RKI) released on Saturday, the number of confirmed cases in Germany rose by 2,034 over the preceding 24 hours, the highest number since the end of April.

On Sunday the number of cases reported within 24 hours was 782. But keep in mind that there is often a lower figure at this time of the week because not all health authorities transmit data to RKI at the weekend.

“We should be worried,” Steffen Seibert, Chancellor Angela Merkel's spokesman said on Friday regarding the recent infection spike. He urged the public to act “responsibly” by sticking to infection control measures like social distancing and mask-wearing.

Where are the increased cases coming from?

According to authorities, private parties and people returning from risk areas on holiday are currently the main contributors to the spread of Covid-19 in Germany.

In North Rhine-Westphalia, 33 percent of new cases were traced back to people celebrating or meeting friends at home. And in Berlin, as many as 60 percent of infections have been traced to private homes, with either people living together infecting one another, or visitors contracting Covid-19 at parties and family celebrations.
READ ALSO:

Meanwhile, the RKI has urged people to avoid large gatherings particularly if they are indoors. Plus the RKI says “events with family and friends should be limited to close family members and friends”.

Last week the institute highlighted the risks of “speaking loudly, singing or laughing” in groups.

How is the government reacting?

Federal Health Minister Jens Spahn and the health ministers of the 16 states are set to meet on Monday to debate how to go forward.

Among the topics to be discussed at the conference is the possibility of stricter measures at family celebrations and other social events, said Berlin's health senator Dilek Kalayci of the centre-left Social Democrats, who chairs the conference.

As The Local reported at the weekend, regional politicians are calling for tougher rules on private parties.

“Private celebrations are a very great danger,” Ursula Nonnemacher, the minister of health of Brandenburg, said.
If the number of infections continues to rise “at this rate”, she added, there was another threat of “tough contact restrictions”. “Everyone should be aware of that.”

So far there is no clear line on the question of whether there should be new upper limits for private celebrations.

Last week there were calls by doctors for nationwide uniform rules on private events. But that has been met with resistance in several German states.

Will they take action?

It looks likely. Chancellor Merkel of the centre-right Christian Democrats (CDU) is set to meet with state leaders on Thursday, and this topic will also be on the agenda.

Health Minister Spahn, of the CDU, has suggested that due to the rising infection rate, the size of private celebrations in Germany needs to be discussed again.

So far, different regulations apply across the federal states. In Berlin, for example, indoor events with up to 500 people are currently allowed.

In North Rhine-Westphalia, “social events such as weddings” indoors are limited to a maximum of 150 guests, whereas in Bavaria they are capped at a maximum of 100 guests.

The federal government believes it's mainly at private parties where hygiene and distance rules (1.5 metre between people not from your household) are not being observed.

That means it's likely a nationwide cap on the number of people attending social gatherings could be introduced.


In view of the rising number of infections, authorities are also thinking about extending the obligation to wear masks, for example in workplaces and in schools.

CDU leader Annegret Kramp-Karrenbauer explained over the weekend that many companies have already introduced compulsory masks in the workplace.

“This could be in any case a step, which becomes obligatory country-wide” to prevent infection spikes and closures of workplaces, she said.