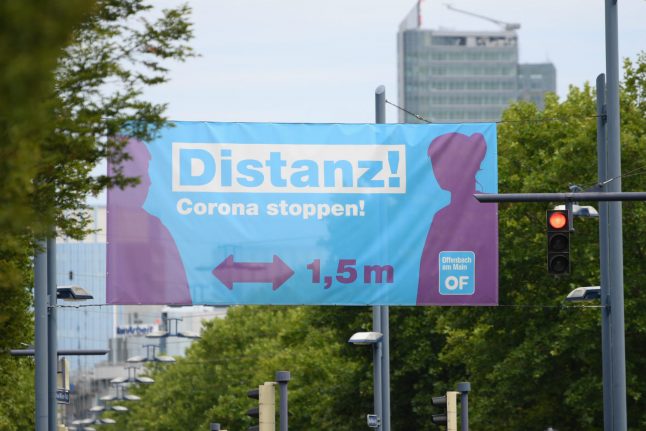 A sign in Offenbach urging people to observe the distance rule. Photo: DPA

Stricter measures will apply in the city, which lies near Frankfurt am Main in the central state of Hesse, after the number of coronavirus cases passed the critical mark of 50 per 100,000 inhabitants in seven days.

Under the new rules, residents can only be in public places with a maximum of five people or with members of their own household.

Meanwhile, outdoor events will be limited to 100 people, while a maximum of 50 people will be allowed in closed rooms.

Restaurants and bars will have to close at midnight from this Saturday onwards. Police are to step up controls to ensure the quarantine is observed, authorities said on Friday.

The new regulations will initially remain in effect until September 3rd. Offenbach has a population of around 128,744 people.

Authorities were keen to stress there was no “shutdown” planned for the area.

Mayor Felix Schwenke reassured residents that there was no reason to panic, and that the preventive measures were being taken to avoid a blanket closure.

He called on everyone to follow the rules and refrain from unnecessary meetings and activities in the next 14 days. He said the situation was similar to what happened in spring when restrictions helped slow down the spread of coronavirus.

“Everyone must understand that right now,” he said.

The Hessian state government promised Offenbach its support. Hesse's Minister of Social Affairs, Kai Klose, also expressed concern about the rising coronavirus infection numbers in Offenbach as well as in the entire state.

Klose said the new infections are currently due in large part to people returning from travel. He called on people to stick to the rules including wearing masks on public transport and in shops. “There is no room for negligence or selfishness,” he said.

When districts in Germany register more than 50 new infections per 100,000 citizens in seven days they are required to impose measures to stop the spread.

According to city officials in Offenbach, around 650 people are currently in quarantine.

The Robert Koch Institute (RKI) reported 1,427 new coronavirus cases in Germany on Friday. A total of 230,048 people have contracted the virus since the epidemic began, according to the latest figures.

Much of the recent rise in new infections has been blamed on returning holidaymakers as well as parties and family gatherings.

Hesse has registered around 14,260 cases since the start of the pandemic, and around 520 deaths. Around 6.26 million people live in the central state.