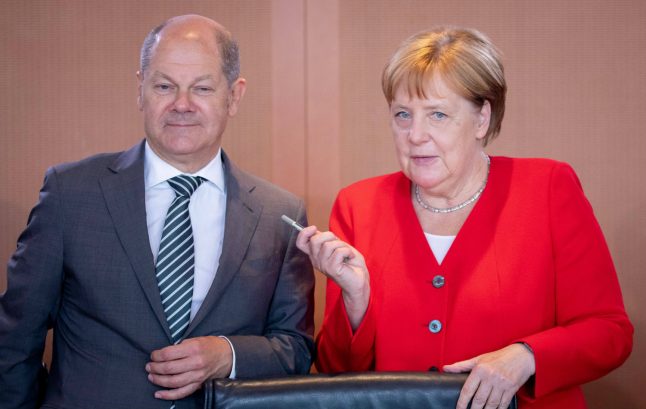 Germany's centre-left Social Democrats (SPD), which is currently in a coalition with Merkel's centre-right Christian Democrats (CDU/CSU), confirmed on Monday that Scholz will be the party's candidate for the top job at next year's elections.

Merkel is set to step down as Chancellor, a post she's held since 2005, when her fourth term ends next year.

Now parties are considering who they'll enter into the race for the top leadership role in Germany with the election coming up.

“Now it's out,” said Scholz in a tweet on Monday. “I look forward to a fun, fair and successful election campaign.”

SPD co-leaders Saskia Esken and Norbert Walter-Borjans also tweeted about the news, saying that Scholz had the “Chancellor itch”.

They acknowledged that the decision could prove controversial to some.

“We know that this decision represents an unexpected turn of events for some,” Esken and Walter-Borjans said. “We ask you to have faith in our path. We are determined to walk this path together.”

Esken and Walter-Borjans have long been considered opponents of former Hamburg mayor Scholz, but last year they won the election for party leader against him. Since then there has been a “close alliance” and cooperation between the party leadership, the parliamentary group leadership and the Social Democratic ministers, the party leaders said.

READ ALSO: SPD shakeup: What does the future hold for Merkel's coalition government

According to recent surveys, Scholz is the most popular SPD politician in Germany, and has stood out in the coronavirus crisis by acting decisively and putting together aid packages worth billions. Within the SPD itself, however, he is divisive within the party – especially among the left wing.

Yet news appears to have been welcomed by the party so far.

SPD faction leader Rolf Mützenich said: “Olaf Scholz has proven with his great political experience in government and parliament, as well as as as head of state government, that he can lead our country even in difficult times.”

Who is Olaf Scholz?

Like his conservative predecessor as Finance Minister, Wolfgang Schäuble, Scholz is known for being attached to budget discipline, although he has made exceptions during the coronavirus crisis which has likely earned him points.

Born in Osnabrück, Scholz, 62, joined the SPD when he was 17 and flirted with the far left of the party in his youth. He was first elected to parliament in 1998.

During his stint as SPD general secretary between 2002 and 2004, he was forced to defend chancellor Gerhard Schröder's unpopular economically liberal reforms.

This earned him the nickname “Scholzomat” for his robotic public appearances.

The SPD has been going through a tough time in recent years with dwindling support. With new leadership elected last year, the party wants to change its path and win back voters going forward.