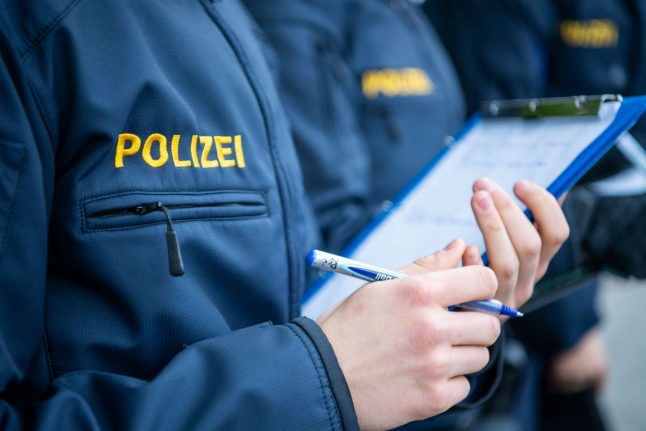 A police officer in Dachau, Bavaria in May 2019. Photo: DPA

Yet many applicants for Germany’s police service are failing because they don’t meet the requirements.

In the northern state of Schleswig-Holstein, the failure rate for dictation was a full 30 percent. Broken down, that means that 20 percent of applicants with an Abitur degree from a Gymnasium and 45 percent with only a Realschule degree did not pass the dictation test. Only six percent did not pass the fitness test.

In Lower Saxony, every second applicant failed the general writing aptitude test and dropped out of the application process as a result.

High failure rates in the tests spotlight the high hurdles across Germany: The number of applicants exceeds the number of training places many times over in most of the 16 states.

In Berlin’s neighboring state of Brandenburg, for example, there were 4,000 applicants for the police, yet only 400 spots available.

However, there are also states where interest is waning: According to union sources, the Hessian police currently has problems filling training positions.

In Baden-Württemberg, out of the Abitur applicants, 70 percent were recruited, while only 30 percent of those with a Realschule degree snagged a spot with the Polizei.

Varies from state to state

The tests vary from one state to the next; however, it is clear that spelling is an Achilles' heel for applicants.

Orthography is important because “half of the working time you sit in the office and write reports to the public prosecutor's office and court – that's a lot of paperwork,” said Reinhard Huber, a police officer in North Rhine-Westphalia.

At the beginning of the year, the Federal Police had controversially lowered the requirements for applicants on dictation in a bid to get more new recruits for “middle level” police.

They could go on to provide security at demonstrations or patrol airports and train stations as well as customs checks on Germany's borders.

The maximum allowed error rate was increased from 20 to 24 errors – based on a text of 180 words.