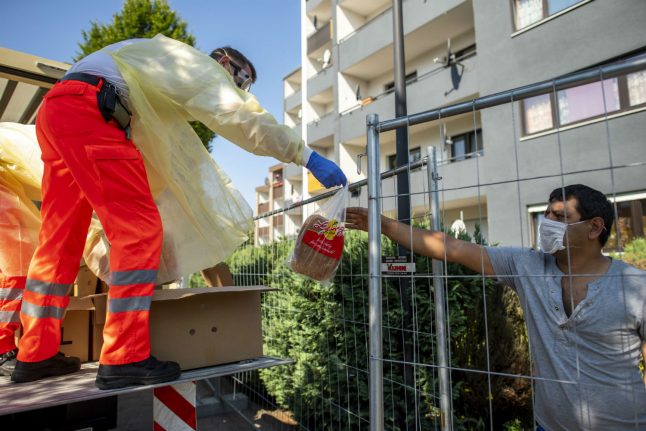 A Red Cross worker hands over food to a quarantined resident in Verl, NRW, after the outbreak at a meat processing plant. Photo: DPA

We've been repeatedly told how important is to keep the basic reproduction number – R number or R0 – under 1.

An R0 of 1 means that each person infected with the virus is passing it on to one other person.

On Sunday night, Germany's Robert Koch Institute (RKI) for disease control reported that the four-day R number, the average number of new cases which reflects the infection situation about one to two weeks ago, stood at 2.88.

The RKI also estimates a 7-day R number aimed at providing a more accurate picture of the situation. On Sunday this value was 2.03.

It means that a person with coronavirus goes onto infect more than two other people.

READ ALSO: IN NUMBERS: What we know about the coronavirus situation in Germany

Why are the R numbers going up?

The RKI says the four-day R number “reacts sensitively to short-term changes in case numbers, such as those caused by individual outbreaks”.

Germany has in the last two weeks been hit with large localised outbreaks.

“Estimates of the reproduction numbers (R-value and 7-day R-value) were between 2 and 3 during the last few days,” said the RKI in its daily report published Sunday night.”This is mainly related to local outbreaks.”

The RKI said there had been a high 7-day incidence rate in four districts in Germany due to these outbreaks. The districts of Gütersloh and Warendorf (both North Rhine-Westphalia (NRW)) and the cities of Magdeburg (Saxony Anhalt) and Neukölln (city district of Berlin) are particularly affected.

In Gütersloh, near Bielefeld, more than 1,000 employees of a meat processing plant have contracted coronavirus.

The authorities have introduced strict measures to try and stem the spread. The affected plant, run by German meat giant Tönnies, has been temporarily closed at short notice and all employees are being quarantined as well as their household members.

Meanwhile, all schools and daycare centres (Kitas) in the district have been closed since June 18th and will remain shut until the end of summer holidays on August 11th.

The town of Verl, located in the affected district, has enforced a quarantine zone for those areas where high numbers of the processing plant’s employees live.

The outbreak in Gütersloh is also linked to an outbreak in Warendorf. Employees of the meat processing company are residents of neighbouring districts. The centre of the outbreak is the Tönnies meat processing plant in the Gütersloh district. Photo: DPA

In Magdeburg, an outbreak affecting several now closed schools has led to an increase in the 7-day incidence, the RKI said.

There's also been a large outbreak in Neukölln, a district of Berlin. It is linked to members of a religious community, said health experts. So far 85 cases are linked to this outbreak.

The RKI also said there have been major outbreaks in retirement and nursing homes.

“In the district of Verden residents and nursing staff have been tested positive for SARS-CoV-2. Further outbreaks were reported among members of religious communities, eg. from Berlin, Hesse and and Mecklenburg-Western Pomerania,” said the RKI.

Should we be worried?

Back in May as Germany was tentatively easing lockdown measures,  Lars Schaade, of the RKI, said that the fewer the overall number of infections, the greater the impact of a localised outbreak.

As of Sunday June 21st there were around 189,822 confirmed coronavirus cases in Germany, according to the RKI, – that's around 680 new cases compared to the day before. Of the total around 8,822 people have died, and 174,900 people are estimated to have recovered.

Meanwhile, as of Monday June 22nd, there were 191,584 confirmed cases, according to Johns Hopkins University, which calculates the numbers in real time and therefore the data differs slightly from the RKI. Of that total, around 8,897 people have died and around 175,038 people are reported to have recovered from Covid-19.

Schade said he would become more concerned if there were R values above 1 over a longer period of time.

“If the second decimal digit were above 1 that would not yet be critical. But the higher it goes above 1, like 1.2 or 1.3 and over a longer period of time, it would create a situation where we would pay very close attention and think about measures on how to counteract that,” Schaade said.

In the RKI report, health experts also urged people to view the numbers with caution.

“Since case numbers in Germany are generally low, these local outbreaks have a relatively strong influence on the value of the reproduction number,” the RKI said.

“Further developments need to be monitored closely during the upcoming days, especially in regard to whether case numbers are increasing outside of outbreak contexts.”

READ ALSO: Why Germany has coronavirus infections under control despite relaxing measures

In order to contain the disease in Germany, a R number of less than 1 is needed.

However, localised outbreaks are to be expected and authorities are taking measures to try and contain these situations.

Authorities will monitor situation closely over the coming days and further measures will likely be taken if the R number stays above 1.