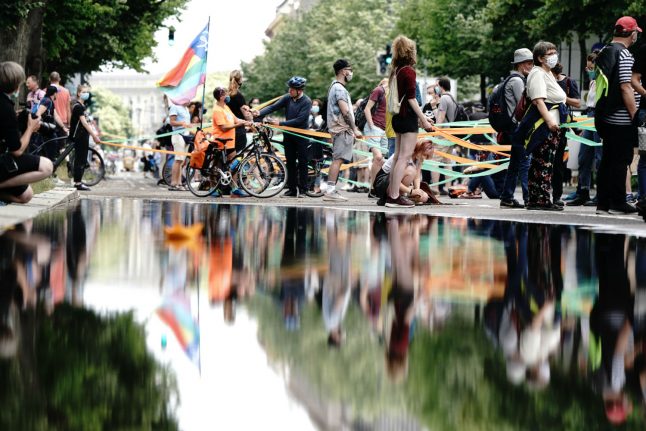 Demonstrators take a stand against racism and discrimination by forming a human chain in Berlin on Sunday June 14th. Photo: DPA

Here I am. Clueless as to where I fit into all of this. A well-to-do, brown, ‘Hochschul-educated’ award-nominated, German citizen (by invitation) of South-Asian ancestry raised in four countries grappling with guilt and confusion as he oscillates between two polar voices inside his head going:

1) ‘Why bother? Enjoy your privileges and make the best of things. The world has never been yours to change in the first place.’

2) ’’You might actually make a difference if you addressed this issue openly’’.

I have a confession.

It’s been on the disk for a few years now.

And keeps growing incrementally every time the time-bomb inside my heart ticks a little louder. And even as I write this I am not sure if this is the moment when it’ll choose to explode.

For now though, a time when the world's second-largest anti-racism protests for #blacklivesmatter are occurring on this soil, seems to be as good a contender as any other.

I don’t even know where I’m supposed to start. So here are some random options:

Being called ‘Apu’ by my friends because they thought I spoke with the proverbial corner shop accent.

The 20 plus years of being asked where I am ‘really’ from.

The anxiety I grapple with every time I’m at an airport in spite of bearing one of the worlds strongest passports.

The time the employee of your reputed airline refused to speak German to me while holding the same passport in her hand 30 seconds after the white gentleman was treated as ‘one of her own’ during check-in.

The fragility, judgement and reprimand my friend and co-employee of the same airline responded with when I ranted about it online. 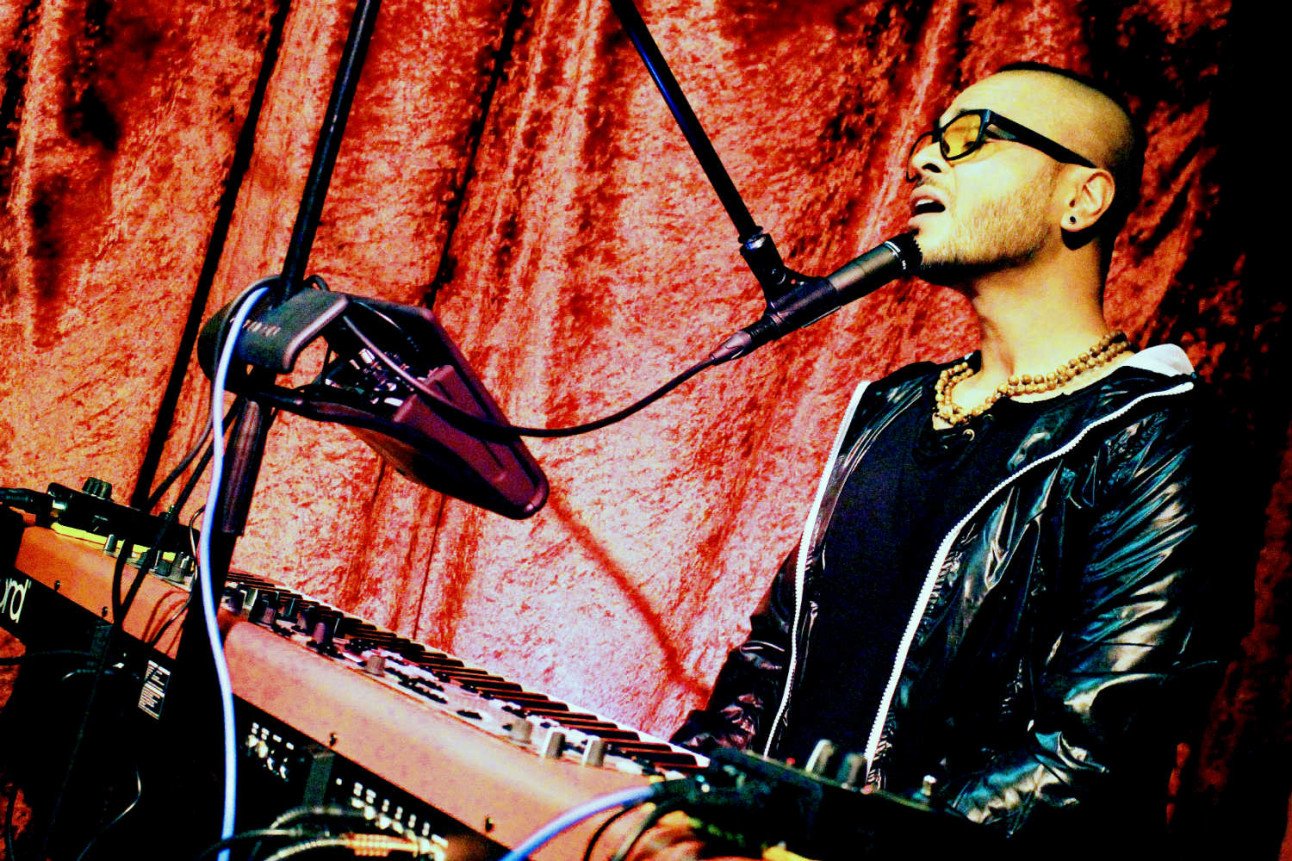 The author during a performance. Photo courtesy of T.L. Mazumdar.

The time two policemen randomly stopped and interrogated me and my brown lady friend literally 20 minutes after she’d landed to visit me after receiving an award a day earlier at one of the worlds most prestigious film-festivals, insinuating questionable paperwork.

The time I found myself to be the only coloured person inside a hall of 300 something Germans listening to a Danish ‘Llama’ proclaim Buddha to be a blue-eyed white man, people born in Africa and their sufferings being ‘a choice’ and how white people should have more kids.

The time someone asked me why I look like a ‘Black-African’ and how I should dress more appropriately after I got offstage playing a concert.

The time my mixed-heritage Afro-Deutsch lunch-date, born and brought up in Germany, kept repeatedly getting asked “What is your nationality?” by the owner of a restaurant before our order was taken.

The time a random white dude came and spat at me after racial slurs for no reason in front of my doorstep because I couldn't give him a cigarette.

The time my white ex-girlfriend said I “live like an immigrant”.

The time a receptionist started throwing a random fit at me with to get out at the school I teach at for trying to access my folder.

The time my college friend declared it was the ‘Indian’ in me for not being clean enough at a New Year's Party. (Apparently all white people love to do dishes).

Or maybe we should just start with the German Citizenship Test I took which does a great job of explaining racism by asking how ‘people of colour applying for a job AT A RESTAURANT’ need to be treated ‘fairly’ on a multiple choice questionnaire.

The standard German dismissive explanation for passive racism and micro-aggressions.

Micro-aggressions plaguing on to two generations of coloured Germans still waiting to be accepted for who they are. Wondering if ‘Ausländer’ is the what they are destined is to be labelled forever.

So why do I feel so ill?

Is it because the constant judgement and categorisation of being the oversensitive, trouble-making whiner who ought to be grateful for the privileges his otherwise ‘backward’ ancestral country(ies) wouldn’t give him in the first place might have some truth to it?

Or maybe I’m making it all up? Because I certainly feel like it on many an occasion.

Wow. For someone who didn’t know where to start, I don’t seem to be doing a great job of stopping now.

And I haven’t been very good at figuring out why I keep tearing up randomly all week either.

Is it rage? Sorrow? Hope? Acknowledgement? Helplessness? Realising it took a George Floyd for the German POC’s to finally be heard on an international platform while thousands take to the street to show their solidarity?

All of the above?

Descending farther down that (what sometimes feels like rabbit hole) doesn’t seem to be helping either.

Which brings me to the my point.

My relationship with the Vaterland.

The fact that it feels severely abusive.

Abusive in a manner quintessentially reflective of the toxic masculinity so many of my white feminist friends seem so passionate about addressing. 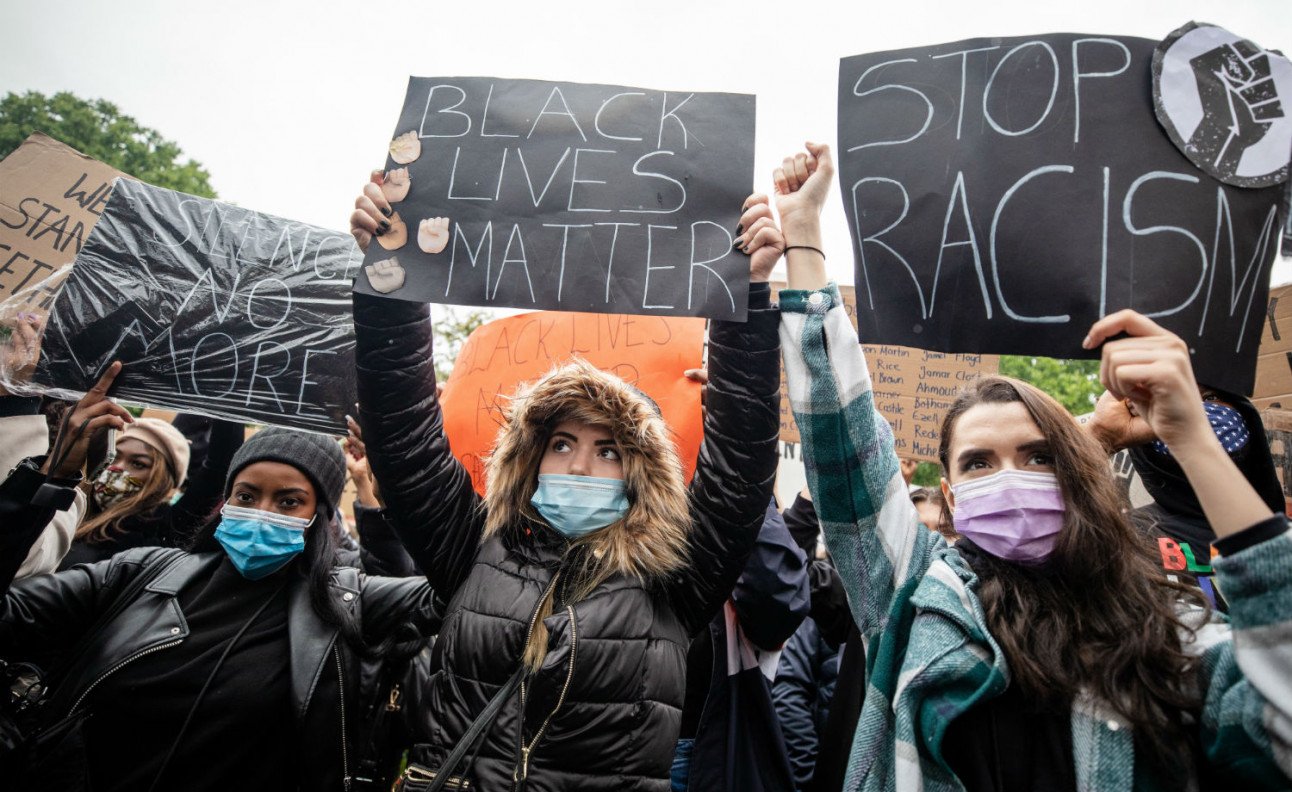 Protesters at an anti-racism demonstration in Stuttgart on June 6th. Photo: DPA

It’s true. I am privileged. I can walk down these streets usually confident I won’t be murdered for being coloured by men in uniform.

I usually get treated well in buildings aware of my education and background.

Heck, I even have a group of friends (of all skin tones, by the way) who are very much on my side and seem willing to take this dark monster on together with me at these protest marches.

Let there be no mistake. I AM privileged.

And here’s the thing.

Not a day goes by when the Vater fails to remind me.

Now get yourself together and be a good soldier. March with me in stoic denial.

And I turn to the Vater and wonder if I’ll ever muster up enough courage to ask him,

“….but have you or will you ever figure out how to love me? Accept me for who I am? The way I chose to love you when I swore on your constitution with my hand on my heart?”

Which is when I notice the scars his skin. Still bleeding.

And realise that he’s not quite ready to reply yet.

Raised on four countries and three continents, Indian-German musician/singer-songwriter T.L. Mazumdar is a twice national-award nominated artist based between Europe and Asia. An original version of this essay was published on his website.