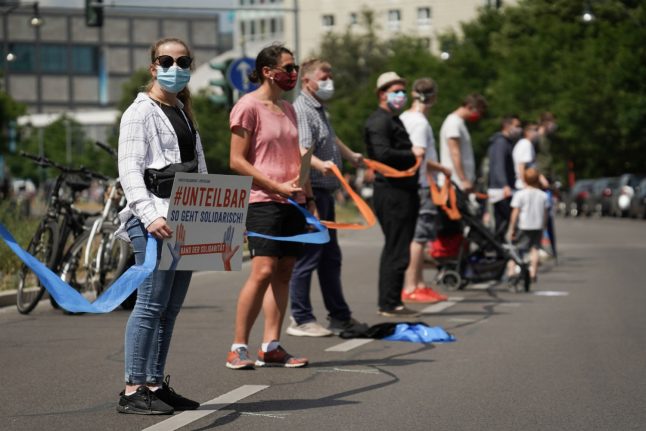 Protesters took part in the 9 kilometre long protest between Neukölln and the Brandenburg Gate. Photo: DPA

Hundreds also turned out in other cities like Leipzig and Hamburg, although some faced rainstorms in the tail-end of a weekend of harsh weather across Germany.

A spokesman for progressive movement Unteilbar (Indivisible) told AFP “more than 20,000 people” had participated in the event in Berlin, while police estimated around 8,000.

The route of the human chain — stretching from the world-famous Brandenburg Gate past the landmark Communist-era TV tower at Alexanderplatz and down into the ethnically diverse Neukölln district — had to be extended to accommodate the numbers. Family minister Franziska Giffey (SPD) participated in the protest and waved at a girl passing by. Photo: DPA

“The coronavirus is worsening existing inequalities. Many people are threatened with being left behind. We will not allow that,” said Unteilbar spokesman Georg Wissmeier in a statement.

Over 10,000 people gathered in Berlin under the banner of Black Lives Matter last weekend in response to the May 25th killing of African-American George Floyd in Minneapolis, and the slogan was also in evidence on banners and T-shirts Sunday.

But the organisers of the latest demonstration posted a broader set of aims on their website.

Their demands include better working conditions and pay for all including migrants, affordable housing, upholding asylum rights, relaunching the economy along green lines and allowing workers more say in how companies are run.

“Who bears the costs of the global crisis, who will be stronger afterwards and who weaker — that's being decided now,” Unteilbar organisers wrote.

Different groups ran individual stretches of the human chain, ranging from political parties like the Greens and Left party to civil society organisations like “Grannies against the far right” and the Fridays for Future youth climate movement.

And appearances by musicians and campaigners along the demonstration route were broadcast by organisers in a live stream of the event. Messages from the “Ende Gelaende” group that has staged sit-ins at open-cast coal mines and fossil power plants appeared alongside an appeal from an Afghan filmmaker who lived in Greece's overcrowded Moria refugee camp for six months.

“Everything is getting worse on the island” of Lesbos, where many people fleeing the Middle East via Turkey first reach European soil, Ahmad Ebrahimi told viewers.

“Please do anything you can” to help, he urged.

Ahead of Sunday's demonstration, some had warned that the gatherings could provoke new transmission of the coronavirus.

“People not maintaining distance, shouting and chanting when packed close together — those are ideal conditions” for infection, Social Democratic Party (SPD) MP and epidemiologist Karl Lauterbach told the Tagesspiegel newspaper.

On their website, Unteilbar organisers urged sticking to “a responsible form of protest in times of pandemic and crisis”, telling participants to remain three metres (yards) apart to minimise the risk of coronavirus transmission.

As the human chain got under way, stewards handed out strips of brightly coloured tape cut to the right length as a guide.

Participants' infection control precautions had been “exemplary”, a police spokesman told AFP, adding that people had kept their distance and worn facemasks.