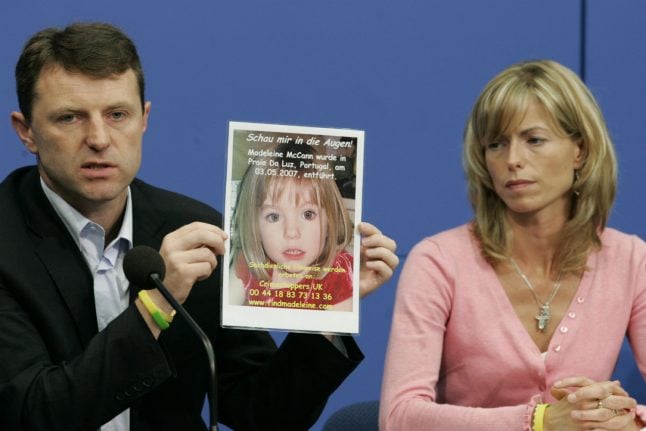 Police revealed this week that they are investigating a 43-year-old German with a long criminal past over the disappearance of three-year-old “Maddie” from the Portuguese holiday resort of Praia da Luz in 2007.

The suspect, named as Christian B. by German media, has a history of previous sex offences including child abuse and rape.

Prosecutors are now examining if the man could be linked to the case of a five-year-old girl named Inga from the town of Schönebeck in Saxony-Anhalt in 2015, national news agency DPA and regional broadcaster MDR said.

Inga disappeared without a trace in the woods while on an outing with her family.

According to local newspaper Magdeburger Volksstimme, the suspect owned a property in the region and was in the area around the period when she went missing.

READ ALSO: What we know so far about German suspect in “Maddie case” Emergency workers searching for Inga in a forest in 2015. Photo: DPA

Thirteen years after Madeleine disappeared from her family's holiday apartment on May 3, 2007, German prosecutors made an appeal for information regarding the suspect, whom they believe killed the girl.

Madeleine disappeared a few days before her fourth birthday, as her parents dined with friends at a nearby tapas bar.

The tragedy sparked one of the biggest searches of its kind in recent years.

The Brunswick prosecutor's office said Thursday that investigators are working on the assumption that Madeleine is dead.

The suspect is currently serving a prison sentence for drug trafficking.

He has completed almost two thirds of his sentence and is therefore close to a decision on a possible release on probation, according to documents from Germany's Federal Court of Justice (BGH) seen by AFP.

However, that decision depends on the outcome of another case against him concerning the rape of a 72-year-old US tourist in 2005 – in the same seaside village of Praia da Luz where Maddie went missing.

Citing official investigation documents, Spiegel magazine on Friday published chilling extracts of a chat between the suspect and a friend in 2013.

Christian B. told an acquaintance he wanted to “capture something small and use it for days on end”, the report said.

In response to the suggestion that this was dangerous, he then allegedly  replied: “Oh, if the evidence – afterwards – is destroyed.”