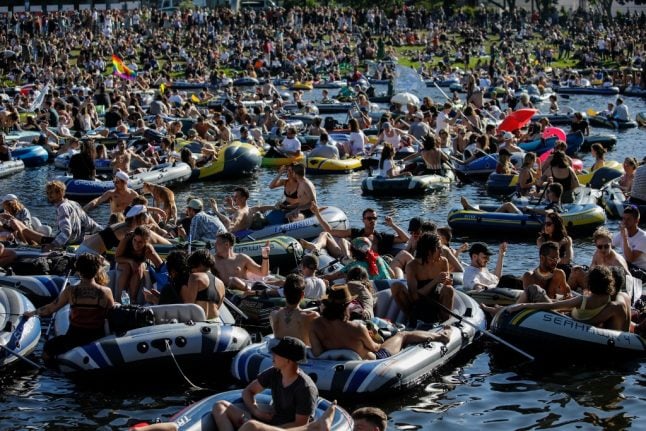 Around 1,500 people climbed into rubber dinghies and floated along the Landwehrcanal on Sunday May 31st, demanding more support and financial help to struggling clubs and festivals during the coronavirus crisis.

However, the event seemed to turn into a party with little social distancing involved. A total of 3,000 people attended the event on boats and on the banks of the canal, according to estimates.

The event was organised by club collective Rebellion der Träumer to support Berlin's hard-hit nightclubs, which have been unable to open their doors since the Covid-19 health crisis began.

However, the event has been slammed across the board, with concerns it could lead to coronavirus outbreaks.

On Wednesday, Health Minister Jens Spahn tweeted: “The pictures worry me, because when partying, the virus spreads particularly easily.

“Yes, the numbers are currently at a low level. Nevertheless, we are still in the middle of the pandemic. Let's secure what we've achieved and continue to take care of each other in our daily lives.”

Frank Ulrich Montgomery, chairman of the World Medical Association, said the demo had the potential to be a “superspreader” event.

He blamed politicians, saying that there is unclear communication on coronavirus restrictions in Germany due to every state having different rules.

“With the chaos of regionally different regulations, no one should be surprised if some people get the impression that now there is no need to follow any rules at all,” Montgomery told the Neue Osnabrücker Zeitung. The demo on Sunday. Photo: DPA

He called for a return to nationwide rules in the fight against the pandemic.

“The boat party has the potential to become the next superspreader event,” said Montgomery. “When a large number of people come together, in the most joyful mood and possibly with alcohol, with songs and the like, it's a safe bet for the virus. We can only hope that it went well and the wind blew the particles away.”

READ ALSO: 'We have to have fun somehow': Partying Germans snub calls to stay home in coronavirus crisis

On Tuesday Berlin health senator Dilek Kalayci expressed her horror at the event. “I stick to my guns, it's not the time for parties,” Kalayci tweeted. Clubs have been hotspots in the spread of coronavirus. She described their closure as “right and important”.

Kalayci continued: “I understand the difficult economic situation of the clubs. There is financial aid for this. But what happened on the Landwehrkanal at the weekend is grossly negligent in pandemic times.

“I appeal to the common sense of club and party fans: I said it at the beginning of the pandemic and I say it today, it is not the time for parties! The virus is still there and is a danger to the health of everyone!”

In a video that Kalayci posted on Tuesday afternoon, the health senator added that she was “appalled” by the images that are likely to make headlines around the world.

In a statement on Facebook, Rebellion der Träumer said it was calling for a serious debate on how to support those suffering from the coronavirus crisis, highlighting that more support for clubs and festivals, as well as self-employed artists was needed.

“As cultural workers our professional existence and our venues are acutely threatened – many artists, cultural institutions and festivals are falling through all the nets,” it said in the post.

The group, which said the demonstration was organised with an alliance of different initiatives and clubs, said it had chosen to host the event on water “in order to minimize the risk of infection as much as possible”.

Rebellion der Träumer said it was overwhelmed by the support but apologised for the scale of the event and that the protest ended outside a hospital.

In a Facebook post, the group said “we did our best in various ways to make the demo as safe as possible”, adding that it had urged people to only go on rubber dinghies with housemates or partners, and to stick to safety measures.