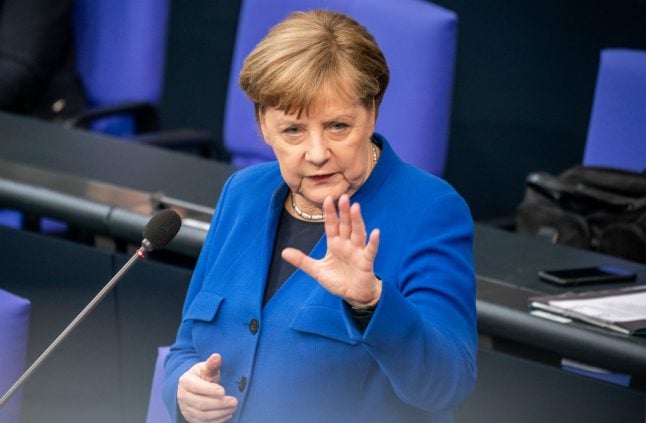 It was a stunning U-turn after years of German opposition to joint borrowing, but the risky political gamble appears to be paying off.

The veteran leader, set to end her political career next year, has already won the backing of key members of her conservative CDU party for the proposed €500 billion ($544 billion) EU recovery fund, aimed at helping the nations hardest hit by the pandemic.

Surveys show that a majority of Germans are also on board.

“I have no doubt that there is broad support for this proposal in the German national parliament,” Bundestag president and CDU heavyweight Wolfgang Schäuble said in an interview with AFP.

The recovery plan, thrashed out with French President Emmanuel Macron, may ultimately never win over sceptical EU member states such as Austria and the Netherlands.

But observers say tectonic plates have started shifting in Germany and the debate about what it means to show European solidarity will never be the same again.

The Merkel-Macron plan is “a necessary and important proposal during this time”, said Schaeuble, who is also a former finance minister and remains highly influential in Germany.

“It calls on Europe to use this crisis to become stronger and more dynamic,” he said.

Like Merkel, Schäuble has long resisted the idea of EU joint borrowing over fears that fiscally disciplined nations — such as Germany – would be forced to pay for the excesses of their less frugal partners — such as Italy or Greece.

During his eight years as Germany's powerful paymaster, Schaeuble was admired at home for his strict balanced budget policies.

But he became a hate figure abroad during the eurozone debt crisis for his insistence on tough austerity for debt-mired nations like Greece.

The coronavirus pandemic however requires a different response, he argued.

In their landmark gambit, Merkel and Macron suggested that the European Commission, the EU's executive arm, borrow on the markets to raise the recovery funds.

The money would be handed out as grants to help the most stricken among the EU's 27 members bounce back, like Italy and Spain.

The 500 billion euros would be paid back through successive EU budgets, with Germany as Europe's top economy funding around 27 percent of it.

Top brass from Merkel's CDU endorsed the Franco-German plan at a meeting of the party's executive committee on Monday.

“Germany will only do well if Europe does well,” Merkel told participants, according to a source at the talks.

Merkel still faces some obstacles. The CDU's most conservative faction, known as the Values Union, has slammed the proposal.

The head of the faction, Alexander Mitsch, has urged German and European lawmakers to resist the planned fund, which he described as “another step” towards turning the European Union into a “debt union and a centralised state”.

Similar criticism has also come from Germany's far-right AfD, the largest opposition party in the Bundestag, and from the smaller pro-business FDP party.

But 51 percent of Germans support the Merkel-Macron effort, according to a survey by the Civey institute for Der Spiegel weekly. Around 34 percent of respondents opposed it.

It is an early victory for Merkel who is riding high in the polls over her coolheaded, science-based handling of the pandemic so far, which has helped keep Germany's COVID-19 deaths lower than in neighbouring nations.

With little left to lose as she readies to bow out at the next general election, slated for late 2021, observers say Merkel is staking much of her political capital on the recovery fund.

“She was eager to reaffirm Germany's European commitment after pretty harsh criticism from Italy and Spain” over a perceived lack of solidarity in the coronavirus crisis, a source close to Macron told AFP.

“She is also keeping in mind Germany's EU presidency from July. She wants to leave her mark.”