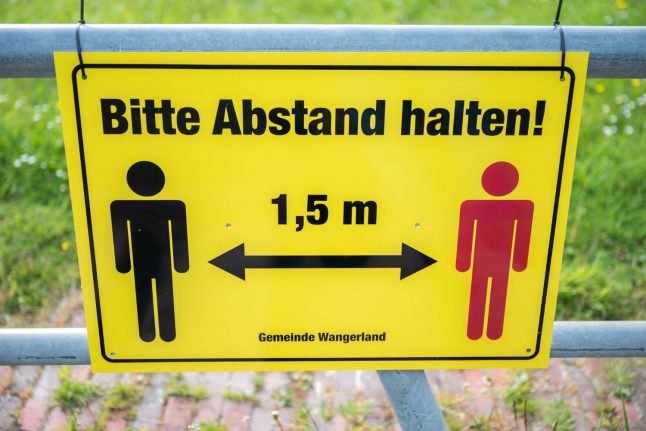 Late on Tuesday May 12th, the Robert Koch Institute for public health and disease control announced in its daily report that the so-called R rate or estimated reproduction number was sitting at 0.94 in Germany.

That means on average a person with coronavirus infects less than one other person. The report went on to say that a “renewed upward trend” is not expected in Germany.

The RKI added that the overall number of cases in Germany was going down. However, there were still clusters of new cases, such as those reported at slaughterhouses, that would have an impact on the R value.

The rising reproduction number had caused alarm, particularly after Chancellor Angela Merkel declared recently that Germany had left the “first phase” of the pandemic behind it and federal states announced relaxations of social restrictions.

As of Wednesday May 13th, a total of 173,171 coronavirus infections had been registered in Germany, according to Johns Hopkins University figures. Of those cases, there have been around 7,738 deaths and 147,298 people have recovered.

Earlier on Tuesday, RKI Vice President Lars Schaade said coronavirus “is not gone,” but the risk of infection is significantly lower than a few weeks ago.

The reason, he said, was that the number of daily new infections was not decreasing but rather approaching a plateau. It is therefore all the more important to continue to observe the rules of hygiene, Schaade explained.

However, the risk is significantly lower than four weeks ago, he added.

In the meantime, clusters of large outbreaks, such as the recent cases in slaughterhouses, have had a greater effect on the value than in the case of higher infection numbers overall, explained Schaade.

“We can estimate that these recent outbreaks have increased reproductive numbers,” he said. If the outbreaks are under control, the R value could drop again.

In the long term, the R number should not remain significantly above 1 – otherwise the number of cases would increase.

Schaade said that values of 1.2 or 1.3 over a longer period of time would require very close attention and action on how the situation could be counteracted.

In future, the RKI will also provide a so-called “smoothed out R-value”, which would better balance out fluctuations. This would be suited to depict longer-term trends.

“Last week, this stable R-value was not above 1 on any day”, Schaade stressed.

In the past week, between 700 and 1,300 new corona infections per day were reported to the RKI, and on Monday almost 1,000 cases were reported.

“The numbers remain roughly comparable to last week's figures,” he said. Lower numbers on weekends are considered normal, for example due to delays in reporting by health authorities and closed doctors' offices.

The R value reflects the infection rate from about one and a half weeks earlier. The value of 1.07 reported on Monday, for example, reflects the situation in the period from April 28th to May 3rd.

The new cases from the past three days are not included in the estimate, because they are not reliable at this stage and can result in fluctuations. The R value is also only one of several ways of measuring the epidemic situation, Schaade said.

To help keep the virus at bay, among other things Schaade said it is important for people in Germany to stay at home as much as possible, limit contacts and keep a distance to other people.

Despite the current low number of new infections in some regions, the number of undetected cases should not be ignored, Schaade said.

People who don't know they have the virus could cause the situation to flare up again if they don't stick to rules, he said.