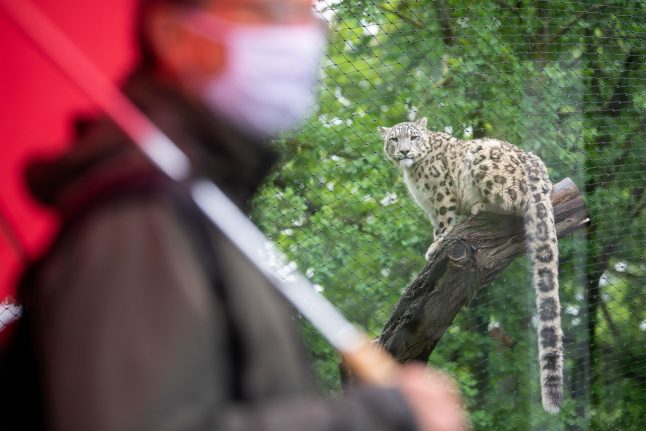 A man with a mask walks in the botanical garden Wilhelma in Stuttgart after it's opened for the first time in almost eight weeks. Photo: DPA

Every week coronavirus restrictions are being loosened around Germany, whether restaurants being allowed to reopen under strict conditions or hotels welcoming guests again.

Here’s an overview of what to expect from each state.

As of Monday, all stores in the southwestern state – rather than those of a space of up to 800 square metres – are allowed to reopen again.

Service providers such as nail and cosmetic studios can also open up again, as can driving schools.

Those eager to set up a tent in the Black Forest will be able to, starting on May 18th, when holiday homes and campgrounds are allowed to welcome guests again.

If the number of new coronavirus cases continues to decline, then restaurants with indoor seating will also follow on May 25th.

And as of May 29th, other accommodation facilities such as hotels and leisure parks should be able to resume operations, announced Minister President Winfried Kretschmann (Greens) and Tourism Minister Guido Wolf (CDU).

All zoos, museums, botanical gardens, museums and stores (up from the previous of maximum 800 square metres) are allowed to open again in the southern state, which had one of Germany’s most strict lockdowns until recently.

All pupils who are finishing school in the coming year are also allowed to return to the classroom, as are fourth year students.

Those eager to sip a drink in a Bavarian beer garden will have to wait a few more days: they are opening their doors starting on May 18th, as are the outdoor seating areas of restaurants. Indoor seating at eateries is permitted to open again starting on May 25th, and hotels can welcome guests again on May 30th.

Starting on Monday, students in the first, fifth and seventh classes have been allowed to return to the classroom again. The goal is to provide all pupils with face-to-face lessons, with a reduced number, by May 29th.

Restaurants will open again on May 15th under strict hygienic conditions, and hotels will follow on May 25th. Berlin's main library (Staatsbibliotek) open on Wednesday and set up a separate sign for the entrance and exit. Photo: DPA

READ ALSO: Berlin plans to open restaurants and all stores – under strict rules

As of May 9th, all shops in Berlin’s neighbouring state have been allowed to open, regardless of their size. All playgrounds have also been open since this date.

Restaurants will be opening up on May 15th, and 10 days later on May 25th, hotels and holiday homes can open their doors to visitors again.

From May 15th, sport training as part of a Verein (association) is allowed again outside – as long as there’s no competition or body contact.

Restaurants and hotels in Germany’s northern city-state remain closed, but the state government is slated to announce a plan about their reopening on Tuesday.

Stores of up to 800 square metres have been allowed to welcome customers since April 20th, but now all stores in the Harbour City are allowed to open again.

All restaurants and other eating establishments can open their doors again on Friday, May 15th under strict hygienic conditions.

Pensions, private rooms and hotels can also resume operations from Friday. In all public areas such as the reception, the conference and breakfast rooms as well as the restaurant, however, the rules of distance between staff and guests, as well as between guests themselves, must be observed, according to the state government.

Sports where a distance of 1.5 metres can be maintained has also been allowed since Saturday. On Friday, fitness studios will also be allowed to open again.

Stores in the central state are now allowed to open, as can some tourist accommodation, such as camping spots and holiday rentals.

However, new guests may only enter the holiday apartments every seven days: This so-called re-occupancy period means that an apartment must remain vacant for three days after a four-day occupancy, for example.

READ ALSO: 'We have to think in phrases': Is this how Germany can return to life with the coronavirus?

This does not apply to the other accommodations, but they may only allocate half of the spots available. Hotels are not allowed to welcome guests again until May 25th.

Restaurants, pubs, cafes and beer gardens can also open again, as long as they allow just half of the full occupancy, and tables are set up to allow for a minimum distance of two metres between guests.

Guests are also required to leave their contact information, as self service and buffets remain out of the question for the time being.

Starting on Monday, museums and exhibitions will be allowed to open their doors again – under the condition that every visitor wears a mask. The number of people allowed inside will be capped and hand sanitiser will be provided.

Restaurants, cafes and pubs will be allowed to open their doors again on Wednesday, May 13th. Fourth class students in Bavaria received colourful instructions on the amount of distance to maintain from each other. Photo: DPA

Germany’s most populous state – and second most affected in terms of coronavirus cases – is loosening a lot of measures starting on Monday.

Restaurants, cafes and pubs can open, offering both indoor and outdoor seating again. Fitness studios will also be allowed to open their doors.  All fourth year students will also return to the classroom, coming in on a rotating basis throughout the day so that they are not all present at once.

In the county of Coesfeld, however, openings (with the exception of schools and Kitas) are being pushed back by a week after an outbreak of infections in a meat processing plant.

As of Monday, training outside with up to five people is again allowed as long as they maintain a distance of 1.5 metres. Dressing rooms and eating areas, however, are to remain closed for the time being.

READ ALSO: A taste of normalcy as first restaurants reopen around Germany

As of Monday, the eastern state is allowing visits to care homes – but residents in them may only receive one visitor per day. Visitors must also wear a mask.

Starting on Friday, the eastern state will allow two different households to meet in public. Restaurants and hotels will also be allowed to open their doors again.

A further easing of restrictions will occur on May 18th, when shops of all sizes, for example, will be allowed to reopen.

All stores regardless of their size opened in Germany’s most northern state starting on Saturday, as long as specific hygienic conditions, such as wearing a mask, were met.

Fitness studios and indoor sports will open or be allowed again May 18th.

The state’s 16,000 fourth year students are now allowed to return to the classroom. Starting on Wednesday, people from two different households can meet either in public or in their private households.