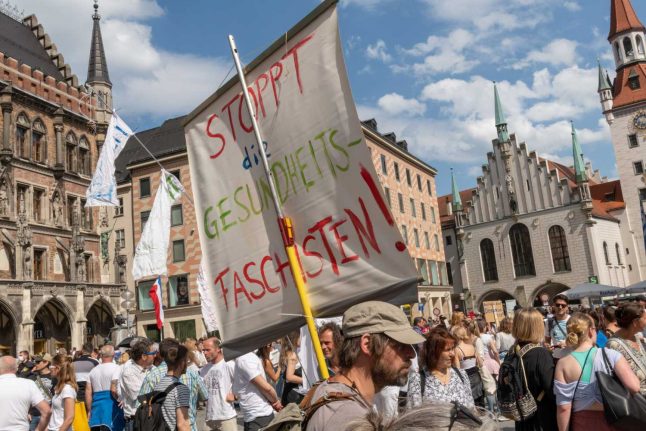 A sign reads 'stop the health fascists' at a protest in Marienplatz in Munich. Photo: DPA

Some are worried about the destabilising effect the demonstrations will have on the country’s efforts to curtail the coronavirus, while others are concerned that the protests may fuel radicalisation.

Over the weekend, protests took place in Berlin, Frankfurt, Dortmund and several other German cities. An estimated 10,000 people attended a rally in Stuttgart, while 3,000 attended a demonstration in Munich.

Despite further relaxing lockdown restrictions on Wednesday, May 6th, protesters have called for the measures to be further relaxed, arguing that their freedoms are being curtailed.

READ ALSO: A taste of normality as first restaurants reopen in Germany

Although the protests clearly exceeded the limit of people allowed to attend demonstrations – between 50 and 80 depending on the state – and many were not respecting social distancing and hygiene requirements, police told DPA.

They allowed them to continue as they were largely peaceful and said that breaking them up “would not be proportionate” to their actions.

The protests have taken part in several cities throughout the entire period of the lockdown, however numbers have begun to swell in recent weeks. In Thuringia, state premier Thomas Kemmerich of the Free Democrats (FDP) attended a rally and did not wear a mask.

Social Democratic (SPD) leader Saskia Esken said on Monday that the radicalisation of the protests could be a threat to democracy.

“Looking away or being silent doesn’t help. We have to stand up and prove our commitment to democracy”.

CDU General Secretary Paul Ziemiak agreed, saying “we must not allow extremists to use the Coronavirus crisis as a platform for their anti-democratic propaganda.”

“(While we take citizens’ concerns seriously) we are taking action against those who are now fuelling citizens concerns with conspiracy theories and spreading fake news.”

Is coronavirus again on the rise?

The concerns have been magnified by news that the infection rate in Germany may again be increasing.

The infection reproductions rate – the key metric used by scientists – rose above 1 on Saturday, increasing from 0.65 at the time the lockdown restrictions were announced on Wednesday.

An infections rate of more than 1 indicates that each person with the virus infects at least one other person, thereby curtailing efforts to stop the spread.

The Robert Koch Institute, which produces the figure, said that it could have come about due to a lag in data accumulation and does not necessarily mean that it is a consequence of the lockdown relaxations.