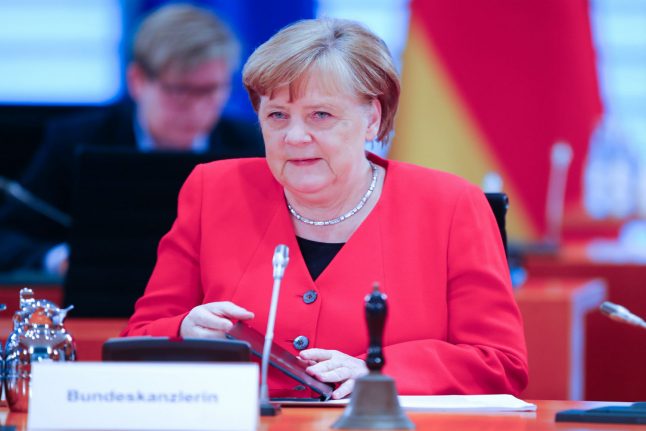 Following a meeting with Germany's 16 state leaders, Merkel said the “very first phase of the pandemic is behind us”.

Germany is now at a point “where we can say that we have reached the goal of slowing down the spread of the virus,” Merkel said. But she added that there is still a “long struggle” ahead.

There have been a total of around 167,000 coronavirus infections in Germany so far (as of Wednesday May 6th), with around 6,990 deaths, according to Johns Hopkins University figures. A total of 135,200 people are reported to have recovered.

The increase in new infections has slowed down, according to the Robert Koch Institute for disease control.

“By and large, we have succeeded in tracing the infection chains,” said Merkel during the press conference, adding that figures gave a positive outlook.

READ ALSO: Germany set to open all shops and schools in May

Merkel said there had been a “very long” discussion about how to ease lockdown and social distancing measures in Germany.

The government and states have decided to extend social distancing restrictions, which include keeping a minimum distance of 1.5 metres from other people in public, until June 5th.

However, now people from two separate households can meet, such as two families, two couples, or the members of two shared flats – instead of the previous requirement of just two people.

But, Merkel emphasised once again that there is still “a very clear restriction on contact” and urged people in Germany to follow the rules.

So when can public life reopen?

In theory Germany's reopening is immediate, but In practice the states will make separate announcements, with some already revealing plans.

As detailed in the draft drawn up before the meeting, Merkel and state premiers have agreed that all shops, regardless of size, will be allowed to reopen.

Bundesliga football matches have been given the green light to play without spectators in so-called “ghost games”, from mid-May, though no official date has been set.

Meanwhile, other outdoor sports will be allowed with restrictions in place.

Universities will stay closed, but all other students are allowed to return to school in stages until the summer holidays.

Large public events remain banned until the end of August.

Merkel said a plan for how to reopen other part of the cultural sector such as theatres, concert halls and cinemas was being drawn up.

The chancellor said states will put their own timetables into place for when restaurants and cafes can open their doors.

However, she said an “emergency mechanism” had to be in place to avoid a new coronavirus wave.

It means that lockdown measures will have to be reimposed if the number of coronavirus infections begins to mount again.

If more than 50 new infections per 100,000 residents are detected within seven days, the affected city or district must impose “a corresponding lockdown plan”.

Merkel has repeatedly warned that opening up public life after lockdown shouldn't be done too quickly.

On Wednesday she said a “balanced agreement” had been struck, but concluded her speech by adding that life with coronavirus in Germany would be a “huge challenge”.