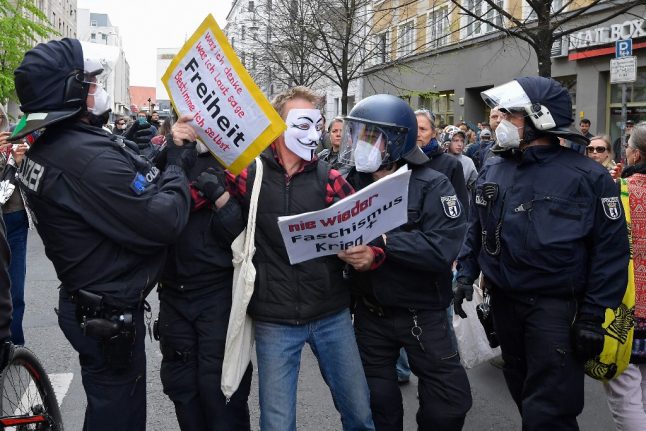 Police remove a demonstrator during a protest against the Covid-19 restrictions in Berlin on April 25, 2020. Photo: AFP

In the capital Berlin, 5,000 police officers are set to be deployed to enforce rules which limit registered protests to 20 people on a day usually characterised by large left-wing demonstrations and street festivals.

The city's hard-left scene has vowed to adapt its traditional May 1st march to observe social distancing and reduce infection risk, but authorities face a further headache this year from others intending to oppose the coronavirus measures.

“May 1st must not become another Ischgl,” the interior minister for Berlin, Andreas Geisel, said this week, referencing the Austrian ski resort which became a hotbed of infection earlier this year.

“I don't want demonstrations to lead to health dangers… the police will be firmly implementing the rules,” he warned.

Though other demonstrations will be taking place elsewhere in Germany, all eyes will be trained on Berlin on Friday.

The city's radical left groups, whose demonstration is usually the focal point of May 1st festivities, have changed their strategy this year to avoid the risk of infection.

Although they have promised to “flood the streets with anti-racist, anti-patriarchal and anti-capitalist content”, the organisers have also urged demonstrators to keep their distance from one another, cover their nose and mouth and remain on the move. “We take the protective measures seriously… and will act responsibly,” they said in an online statement.

Yet other groups of protesters may not take such precautions.

Since the end of March, the city's central Rosa Luxemburg Platz has become a weekly rallying point for a self-proclaimed “democratic resistance” to the coronavirus curbs on public life.

The so-called “hygiene demos” have attracted left and right-wing extremists, as well as conspiracy theorists and anti-vaxxers, who argue that the restrictions are an illegal attempt to curtail civil liberties by an authoritarian state.

On their website, the organisers relativise the dangers of the COVID-19 disease, which has so far claimed the lives of more than 6,000 people in Germany, and call for an end to the restrictions put in place to slow the contagion.

Their last demonstration on April 25 saw around 100 people arrested for contravening a ban on public assembly.

More than 500 people attended the protest. Some charged that Chancellor Angela Merkel had imposed a “ban on living”, while others raged against the “pharmaceutical lobby” and the Bill Gates Foundation, which runs vaccination campaigns in Africa.

Antisemitic blogger Nikolai Nerling was also present, while other protesters wore T-shirts claiming “Rockefeller and Rothschild” had “invented the coronavirus”.

The protesters have been assembling in front of Berlin's Volksbuehne theatre, prompting a furious reaction from director Klaus Doerr, who has dismissed them as a “provocateurs and veritable liars”.

Germany's far-right AfD party has not officially joined the protests, though it too insists that Merkel has overreacted to the pandemic and has called for a return to social and economic normality.

Opinion polls show extremely limited public support for such positions. A recent Kantar poll showed 74 percent of Germans were in favour of the restrictions, while YouGov estimated that 49 percent believed that the lockdown was being lifted too quickly.

Yet the uncertainty surrounding the coronavirus has led to a boom in conspiracy theories on social media, according to the Amadeu-Antonio anti-racism foundation.

“People are currently isolated from their social circles and are spending a lot of time online,” he added, which could help “fuel belief in conspiracy theories”.