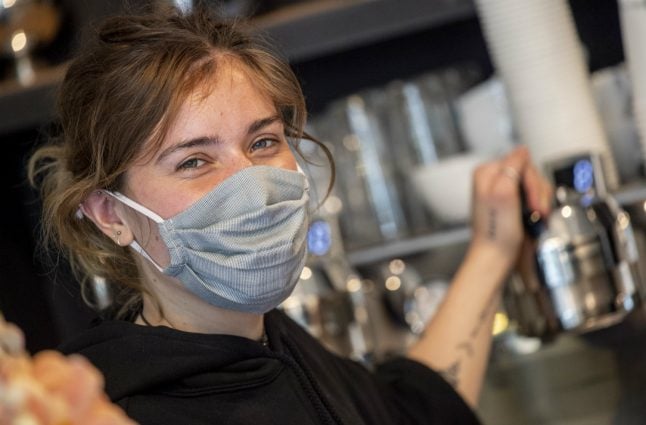 “It's warm, slippery, you can't breathe well, but if it's to avoid infection, I'm fine with it,” Emil, a commuter at a Berlin train station, said on Monday.

Starting this week, donning face masks in public is compulsory in all of Germany's 16 states but there are many regional differences.

The rules are most relaxed Berlin, where masks are required only on public transport and not in shops. There are no fines for not complying.

Bavaria on the other hand has threatened penalties of €150 for anyone  caught flouting the rules and shop owners who fail to make staff cover up can be fined €5,000.

READ ALSO: From schools to face masks: What's changing in Germany from Monday?

The World Health Organization initially said masks should only be worn by medical workers and carers but the little squares of fabric are now widely seen as key to gradually reopening societies as the world learns to live with  the pandemic.

With its new rules, Germany follows in the footsteps of a string of European countries where mask-wearing is now compulsory, including Austria, Poland and the Czech Republic. At one Berlin regional train station, compliance was widespread on the first day with even small children donning colourful masks.

“I work in the health field and I think we should have had this in place much sooner in order to protect each other,” said Claudia, a passenger in her 50s who opted for a mask with a floral pattern.

Fellow commuter Andre, also in his 50s, was less enthusiastic.

“With the mask on, I can't eat on the train,” he said, pulling down his mask to talk to AFP. “I have to eat before or after. It's not very important, but personally it bothers me.”

Germans are free to choose which type of mask to wear, from disposable ones to self-made cloth versions, and many states have said they will also accept scarves and bandanas.

READ ALSO: Face masks in Germany: What are the requirements and fines in every state?

Berlin's Zoo station offered reusable masks for sale in a vending machine for anyone caught out at the last minute, charging €5.50 euros ($6) apiece.

In Frankfurt, the local transport company handed out 10,000 disposable masks to passengers on buses, trams, metros and trains. A woman wearing a mask outside a chemist in Hamburg. Photo: DPA

Tiny Saarland state, along the border with France, has vowed to hand out five free masks to each of its one million residents.

The mask-wearing comes as Germany slowly begins relaxing its lockdown.

Smaller shops, car dealerships and some schools have already been allowed to reopen and plans are being drawn up to ease other restrictions.

Although Germany has recorded over 155,000 coronavirus cases, it has one of  the lowest mortality rates in the world — just over 5,700 people have died. Keen not to undo the good work, Chancellor Angela Merkel has repeatedly urged Germany's states to proceed with caution, even as the lockdown batters Europe's top economy.

Merkel said she “strongly recommended” wearing masks in public, and Germans are eagerly waiting for their first glimpse of the veteran leader doing her usual weekly shop in a mask.