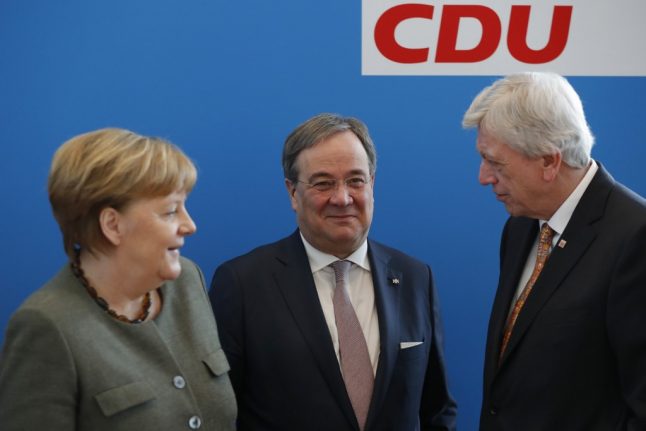 Laschet and Söder head Germany's biggest states by population and area  respectively — and also the two worst hit by the coronavirus — and have played a key role in the decision to start reopening schools and smaller shops.

Yet the two prospective Merkel successors have clashed over the question of  how quickly Germany should relax its coronavirus curbs.

Laschet is a prime candidate to be the next leader of Merkel's CDU party, having thrown his hat in the ring when the chancellor's hand-picked successor Annegret Kramp-Karrenbauer stepped down earlier this year.

As head of the CDU's Bavarian sister party CSU, Söder also has a claim to  be put forward as the conservative alliance's candidate at elections scheduled  for autumn 2021, even if he has until now been coy about the prospect.

Söder held a conservative line as Germany mulled an extension to its  coronavirus shutdown this week, while Laschet urged a return to “responsible normality”.

With increased testing and the widespread distribution of masks, Laschet is hoping to revitalise the German economy quickly after it entered into recession this week.

He has also warned of collateral problems such as unemployment and a rise  in domestic violence, and his state government even suggested schools could  reopen from as early as next week, rather than the May 4th restart mooted  elsewhere.

That was quickly slapped down by Söder, who warned against “one-upmanship” in the race to relax restrictions. Söder in April at a mask manufacturing operation in Bavaria. Photo: DPA

Yet Söder has placed himself front and centre in the coronavirus fight,  and has himself been accused of going it alone.

In March, Bavaria was the first of Germany's 16 states to introduce sweeping restrictions on public life, acting unilaterally while other states  hesitated.

And while state premiers agreed with Merkel to reopen schools gradually from May 4th, Soeder has decided to push back that start day by a week.

The moves angered his colleagues, but Söder's hard line has gone down well with Bavarians. A recent poll by public broadcaster BR put his approval rating  at 94 percent, earning him the nickname “Corona Kaiser”.

That popularity may yet rub off on a national level, argues political  scientist Gero Neugebauer of Berlin's Free University.

“For the conservative part of the German electorate, the attitude Soeder is  trying to present of a decisive leader could be attractive,” Neugebauer told  AFP.

Meanwhile Laschet, whose state was home to the first major outbreak of the virus in Germany, has cut a more uncertain figure.

He has appeared less frequently alongside Merkel. And in March, he was  derided by Germany's biggest-selling Bild daily as an example of “how not to  wear a mask” after he appeared at a hospital wearing a mask that failed to cover his nose.

Yet as Neugebauer also points out, not all German voters like a strongman.

“(People) have recently voted for the CDU/CSU because of Merkel and because of the party programme,” he said.

While Laschet and Soeder vie for supremacy, other candidates such as former environment minister Norbert Roettgen and long-time Merkel rival Friedrich Merz have had to take a step back.

Merz, previously the favourite among right-wing voters, is now merely “the man who sits on the board of one of Europe's biggest toilet paper producers”,  as Neugebauer put it.

In times of crisis, he added: “Germans will vote for the people…who they believe are competent and able to solve the problems at hand.”

By Mathieu Foulkes and Kit Holden