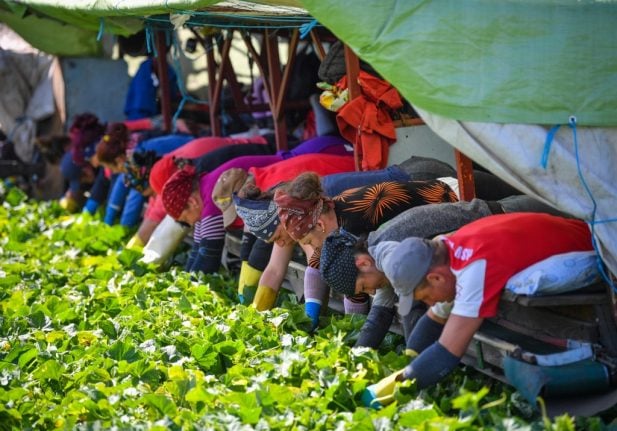 Around 300,000 seasonal workers travel to Germany each year, mainly from Poland and Romania, to help with fruit and vegetable harvests, according German Farmers' Association.

On Thursday, images of some 1,800 seasonal workers waiting shoulder to shoulder in a packed parking lot at the airport in Cluj-Napoca in central Romania were shared widely on television and on social media.

Authorities are investigating whether the crowd breached strict social distancing and other rules to stop the spread of the new coronavirus.

The Transport Ministry said all charter flights “will be processed today in order for airport passengers to reach their destinations”, dismissing reports about flights being cancelled.

“Three charter flights with nearly 600 passengers on board are awaiting the green light from the Ministry of Transport before they can take off for Germany,” Bucharest international airport spokesman Valentin Iordache told AFP.

Six other planes transporting seasonal workers were to take off from Cluj-Napoca and two from Iasi in the east, all bound for Germany. Romania, which has recorded 5,467 coronavirus cases and 265 deaths so far, declared a state of emergency last month and banned regular flights to a number of EU countries, including Italy, Spain, France and Germany.

Prime Minister Ludovic Orban said it was “inadmissable” that workers had waited for flights in large numbers without “measures taken regarding physical distancing and protective equipment”.

Cluj-Napoca airport director, David Ciceo, said organisers brought all passengers at once although there were a few hours between each flight.

“There were three destinations: Baden-Baden, Berlin and Duesseldorf. The passengers didn't even know which of those were their destination. They were abandoned in the parking lot,” Ciceo told local media.