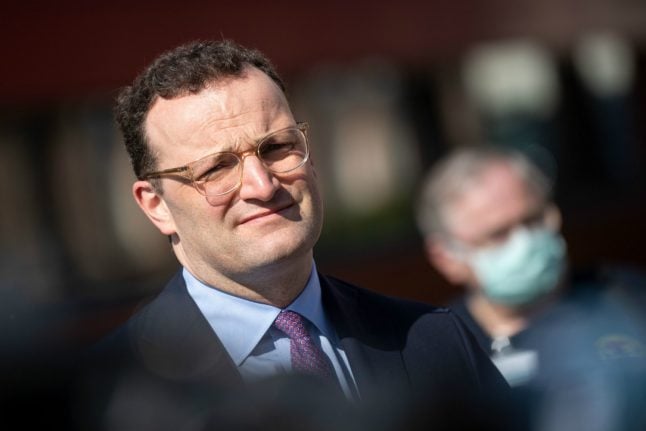 In an interview with Handelsblatt, Spahn said there was a “positive trend” regarding Germany's coronavirus figures but said it was too early to give the all-clear and that's why Germany could not follow in Austria's lead and discuss lifting lockdown measures sooner.

“We are seeing a positive trend,” Spahn said. “But it must continue. That is why it is important to remain consistent over Easter. Even if it is difficult in this weather, we should stay at home and avoid family visits so that the infection curve does not rise again.”

As of Thursday April 9th, there were more than 113,200 confirmed coronavirus cases in Germany, with more than 2,300 deaths, according to Johns Hopkins University figures.

A total of around 46,900 people have recovered, according to these figures.

So what will happen if the curve continues to flatten, and the number of active cases slows?

“If it does, we will be able to talk to the state premiers (across Germany's 16 states) about a gradual return to normality after the Easter holidays,” said Spahn “The word 'gradually' is important to me. It won't work, if everything returns to normal from one day to the next.”

READ ALSO: What travel is (and isn't) allowed over Easter weekend in Germany

'A long time before things return to normal'

The government has so far played down talk of relaxing strict coronavirus rules.

Chancellor Angela Merkel has repeatedly urged people in Germany to be patient and to stick to social distancing measures, which include a ban on gatherings of more than two people and the closure of schools and non-essential shops.

Merkel said on Monday that restrictions on free movement and business closures, in effect in Germany since March 22nd, would remain in place until at least April 19th and that it was too early to talk about easing the lockdown.

But an internal government paper showed what Germany's path out of the current shutdown could look like. It included talk of infection contact tracing, compulsory mask wearing and continued social distancing measures.

Spahn said: “In the near future, the main task will be to quickly identify and isolate those infected by means of broad testing. And then to track down and isolate their contacts. This is the only way we can break chains of infection.”

He said a “corona app” developed for smartphones would allow people in Germany to update their situation to health authorities. Spahn said the use of the app would be voluntary but he was counting on the public to do their bit.

“The message is that the way out of the restrictions of everyday life is easier if as many citizens as possible participate in the app,” he said. When asked how long the pandemic would continue in Germany, Spahn said it's more likely to be months rather than weeks.

“At the most, until we have a vaccine,” he said. “But it's also up to us. If we look at where a lot of people have been infected, it's been parties, concerts or football matches. In other words, occasions where people were very close to each other over a long period of time.

“We can all make a very big difference by following simple rules – keep your distance, wash your hands, the handshake is almost non-existent – and this significantly reduces the risk of dynamic spread of the virus.

“In other words: with the appropriate caution, more normality can soon be possible again. But unfortunately we will probably have to go without parties of all kinds for a longer time.”

What will happen to work and business in Germany?

Spahn said in the short term “severe cuts and a decline in growth” was to be expected on business and the economy.

He said after lockdown, businesses would be required to put measures in place to ensure safety of employees and customers.

“Companies or industries that can demonstrate that they can ensure hygiene rules would be able to return to work more easily,” Spahn said.

But there's a long road ahead.

“We want to take this path in dialogue with all sectors of the economy,” Spahn said. “One thing is certain: wherever people get close to each other in private – be that at major events such as football matches or in clubs – it will be a long time before things return to normal there.”

Why is the coronavirus situation not as bad in Germany?

In the interview, Spahn was asked why Germany has not faced the coronavirus hardships like other European countries including Italy.

He said it's because Germany “tested a great deal and identified the first cases early on”.

“This enabled us to prevent the virus from spreading quickly,” he added. “That bought us time. We used that time to get protective gear and prepare our hospitals.

“We currently have 10,000 free intensive care beds. No other country in the world has that. This is a collective effort and is also due to the good work of the doctors in the practices. In some countries, the spread of the virus was not detected until patients were admitted to hospitals.”

On Thursday, the government's 'corona crisis' cabinet was set to hold another meeting.

Ministers are set to discuss the procurement of protective material, as well as a possible increase in shorter hours (Kurzarbeit) compensation for employees who have had their hours cut because of the crisis.

In the afternoon, Spahn, Family Minister Franziska Giffey (SPD) and the head of the Robert Koch Institute, Lothar Wieler, were set to provide another update on the current situation in Germany.