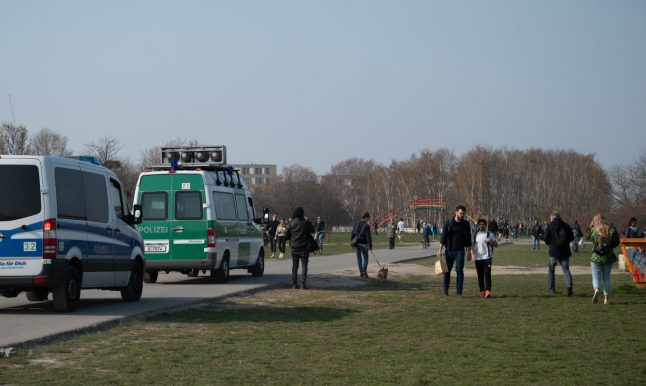 According to regional newspaper the Tagesspiegel, the Berlin Senate is currently working out the details on the new catalogue of fines.

A strict ban on contact has been in effect in Berlin for just over a week.

It means that people must stay at home and only go outside when it is necessary, such as to get essential shopping, visit the doctor, carry out essential work or exercise. For a more detailed look at the rules check out our story here.

Police have been monitoring the situation and writing up dozens of reports every day on people who are not sticking to the ban. However, so far, the Senate has not agreed on specific fine regulations, although a draft has reportedly been under discussion.

On Monday March 30th, Berlin’s interior senator Andreas Geisel of the Social Democrats (SPD) said the Senate will debate and possibly decide on a list of fines for violations of coronavirus rules on Tuesday.

Last week the state of North Rhine-Westphalia decided on a strict catalogue of fines to enforce the ban on contact. People who have picnics could now face €250 (per person), while those who organize sporting events face paying €1,000.

Other states, such as Bavaria, Baden-Württemberg and Rhineland-Palatinate have also drawn up regulations.

As well as Berlin, Bremen, Hesse and Saarland are also working on new fine regulations.

Berlin politicians still need to debate if they will allow people to sit alone or in groups of two on grass or benches, broadcaster RBB reported. According to the draft paper, seen by the Tagesspiegel, violations of the minimum distance in public spaces (1.5 metres) could in future cost between €50 and €500 in Berlin.

Residents who are stopped by police and cannot identify themselves despite being required to show proof of identity and address may have to pay somewhere between €25 to €75.

And anyone who is outside their home without having a valid reason for doing so could be faced with a fine of up to €500.

The punishments listed in the draft are more severe for businesses that flout the rules.

According to the draft, anyone who opens a business that is meant to be closed (such as a non-essential shop or bar), could face a fine of up to €10,000. Operators of businesses that are still open but do not adhere to prescribed hygiene measures may have to pay up to €2,500.

In repeated cases, a fine of up to €25,000 is possible – this is the maximum amount stipulated under the Protection against Infection Act in the area of administrative offences.

Meanwhile, violations of the right of assembly are considered criminal offences: anyone caught “with three or more participants” at events or meetings could be charged under a criminal offence.

This applies to both the organisers and the guests. And, as a lesser offence, anyone who organizes or attends an event with fewer than three participants may be liable to a fine of up to €2,500 (for organisers) or €500 (attendees).

The basis of all decisions and measures taken in Berlin so far is under the Protection against Infection Act. Up to now, police and the public order office have acted without a clear catalogue of fines.

Berlin police are already checking daily whether citizens and businesses are abiding by the rules, as The Local reported.

On Sunday between 6am and 6pm about 350 officers were monitoring the city checking lockdown rules were being adhered to.

On Sunday night between 6pm and 6am police lodged eight criminal and 31 administrative offences.