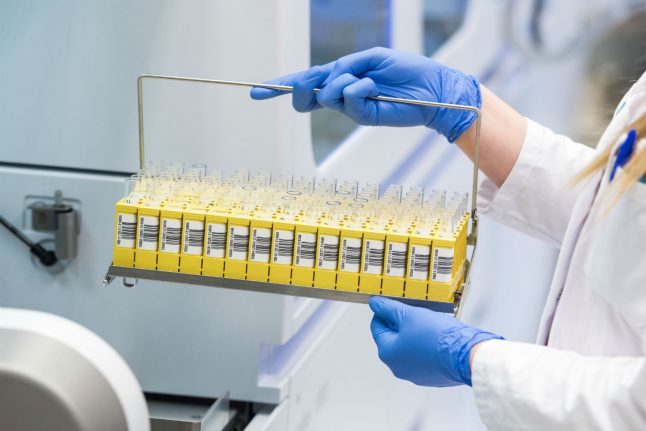 Germany is already carrying out more coronavirus tests than any other European country at a rate of 300,000 to 500,000 a week, according to officials.

But Chancellor Angela Merkel's government aims to ramp that up to at least
200,000 tests a day, according to an interior ministry document seen by several German media outlets.

The goal would be to test all those who suspect they have caught the virus, as well as the entire circle of people who have come into contact with a confirmed case.

Current testing criteria are focussed on those who are sick with COVID-19 symptoms and have had contact with a confirmed case.

The idea, according to the document, is to move from tests “that confirm the situation” to tests that “get ahead of it”.

A crucial weapon in the battle would be the use of smartphone location data to trace a patient's recent movements, to more accurately track down and isolate potentially infected people.

While government officials and epidemiologists have come out in favour of cell-phone tracking, it remains a controversial idea in privacy-minded Germany, a nation haunted by the surveillance of the Nazi era and the communist-era Stasi secret police.

Germany's proposed plans echo the “trace, test and treat” strategy that appears to have helped South Korea bring its outbreak under control. It has included mass screening for potential cases and heavy use of technology to monitor patients.

Although Germany and South Korea are two very different countries, the Asian nation's virus strategy “can be an example”, the head of Germany's Robert Koch Institute (RKI) for disease control told the Frankfurter Allgemeine daily.

With a total of 389 deaths out of more than 52,000 cases, Germany has a mortality rate of just 0.7 percent — compared with around 10 percent in hardest-hit Italy and eight percent in Spain.

But German Health Minister Jens Spahn has warned that the country could face “a storm” of new cases in the weeks ahead.

The RKI's Wieler warned that the dramatic scenes at Italian hospitals at breaking point could happen in Germany as well.

“We can't rule out that we will have more patients than ventilators here too,” he said.

With 25,000 intensive care beds equipped with ventilators, Germany is in a better position than many countries to deal with an influx of patients in respiratory distress.

But years of underfunding have left the country's healthcare system woefully understaffed.

“In recent months, some intensive care beds have had to be put out of action because of a lack of staff,” said Reinhard Busse, a specialist in health economics at the Technical University of Berlin.

Germany currently has some 17,000 unfilled vacancies in nursing care.

As a result, many hospitals have resorted to drafting in retired health professionals or student medics to help with the expected coronavirus onslaught, including at Berlin's renowned Charite university hospital.

“Even before the coronavirus crisis, operations had to be cancelled because of a lack of staff,” Uwe Lübking, head of labour market policies at the German Association of Towns and Municipalities, told AFP.

And when there is personnel on hand, nurses can spend up to four hours a day doing paperwork as Germany continues to lag behind other nations in digitalising administrative tasks, experts say.

To make matters worse, confinement measures and border checks brought in to
stem the virus spread have made it harder for foreign workers to travel to their German workplaces, with healthcare institutions on the frontier with Poland particularly affected.

Critics have also argued that the German health system, which pays hospitals a fixed price per surgery, has led many hospitals to focus on the more lucrative practice of offering scheduled surgeries like hip or knee replacements, at the expense of strengthening their emergency care facilities.

Although Spahn has urged the directors of some 2,000 hospitals and clinics to cancel all non-urgent surgeries, several are resisting the call, according to Der Spiegel weekly.