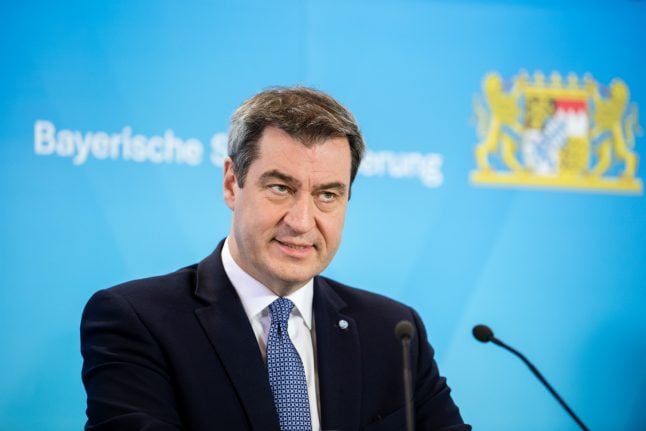 Bavaria declared the disaster (Katastrophenfall) on Monday March 16th to allow the state’s authorities to push through new restrictions faster, including possibly asking the German Armed Forces (Bundeswehr) for assistance.

State premier Markus Söder announced the new status and restrictions on Monday. He described them as “drastic” but said social contact must be limited as much as possible in a bid to stop the spread of the virus.

“The situation is very serious and changes daily, unfortunately not for the better,” said Söder.

Most restrictions come into force from Tuesday and throughout the week.

Other parts of Germany, including Berlin and Cologne, are imposing strict restrictions on public life.

As of Monday, there were a total of 886 confirmed cases of coronavirus in Bavaria (6,245 in total in Germany).

Why have they declared a disaster?

In the past disaster situations have been declared in certain districts in cases of extreme flooding or snowfall.

But it's the first time the state as a whole has declared this situation. The regional government has done so that authorities and organisations can be coordinated at the state level.

It also makes it easier to recruit volunteers.

The new restrictions are divided into three areas. Here's a breakdown of them:

“There is no curfew, at least not at the moment,” Söder said.

People in Bavaria can continue to go to work (although working from home is advised where possible).

However, residents should consider if other activities outside are necessary, and if not they should remain at home.

Events are no longer allowed, except private small gatherings (for example between family members) at home.

This is in force until at least the end of the Easter holidays which finish on April 19th.

Schools and day care centres (Kitas) will remain closed until the end of the Easter holidays.

From Tuesday onwards, everything that falls under the recreational facilities sector will be closed.

Changes to restaurants and shops

From Wednesday onwards, new rules will be in place for the catering industry. Generally, only restaurants and company canteens will be allowed to remain open, and only from 6 until 3pm.

A distance of 1.5 metres must be maintained between guests in the restaurants. A maximum of 30 people at one time can be in one venue. After 3pm it's only possible to take food away, or use a delivery service or drive-through.

These stores are now allowed to be open until 10pm on weekdays, and also from 12 to 6 p.m. on Sundays. But Söder appealed to citizens not to panic buy in supermarkets.

Companies should remain open, and public transport is to continue.

Strict border controls to Austria have been introduced. German nationals and residents of the Bundesrepublik may still enter Germany at any time, and goods delivery and commuter traffic is continuing.

Support for the health authorities will be stepped up to ensure they have adequate supplies and equipment.

Coronavirus testing capacities will be significantly expanded. But tests will only be carried out if symptoms are present to prevent overloading the system.

Hospitals will be completely geared towards coronavirus treatment: pandemic plans will be drawn up and space will be maintained. Rehabilitation clinics and general practices will also be included in the process.

University hospitals are being switched from research to care.

A protective shield is being developed for the municipal hospitals so that the hospitals can continue to operate economically.

Medical students are asked to be available as staff. Retired doctors and staff on parental leave will also be asked to help.

READ ALSO: Merkel calls for social contact 'to be avoided where possible'

To protect the Bavarian economy from the consequences of the crisis, Bavaria is making up to €10 billion in special funds available.

“No one will be left alone,” said Söder.

The authorities will support businesses in a number of ways.

For example, an organisation has been set up that gives the state the chance to invest in companies and protect them from the threat of going bust. This means firms can stay afloat and after a certain period of time the state can withdraw.

There will be immediate aid for companies in need, under the rules.

This includes support for businesses in the catering, tourism or trade sector, and also for all those working in the cultural sector.

According to Söder, it should be possible to obtain aid of between €5,000 and €30,000 without lots of bureaucracy.