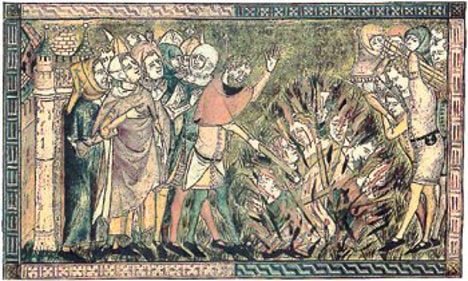 Victims being burned during the Black Plague. Photo: Wikimedia Commons

Outbreaks of coronavirus have many across Europe concerned. Yet long before modern-day Germany existed, both localised epidemics and global pandemics have left their trace on the land, society and culture.

READ ALSO: How German lands responded to the Black Death

We look at their legacies, and how this current threat to public health stacks up.

One of the first significant outbreaks of disease in what is today Germany can be studied and traced is the Antonine Plague of 165 – 180 CE.

While we cannot be certain, this was thought to be a severe strain of smallpox brought back to the provinces Germania Major and Inferior, via returning legions.

In their cramped quarters in bases along the Rhine, the disease raged, leading to a significant loss of manpower. St Sebastian pleading for the life of a gravedigger afflicted with plague during the Plague of Justinian. Photo: Wikimedia Commons

Scholars of the period point to the reduced military strength of Rome in these provinces as one of the reasons that Germanic and Gallic tribes were able to push Roman forces back significantly for the first time.

Manpower and labour was expended to reinforce military borders that really couldn’t be afforded, spelling the end of imperial expansion.

Four hundred years later, the Justinian Plague – this time thought to be a variant of the Bubonic Plague – would kill between 25 and 50 million across mainland Europe.

With large population centres decimated and efforts to curb the disease hampered by lingering warfare, this was perhaps the final death knell for what we know as the Western Roman Empire, and the dawn of what some call the ‘Dark Ages’.

Far more well known than these pandemics is the Black Death. Originating in the Near East around 1348, three distinct strains of the Bubonic Plague, or Yersinia Pestis bacteria, killed up to a half of the population of Europe – hundreds of millions strong at the time.

Central to the spread of this epidemic was the nature of the medieval world. Trade routes pilgrimage destinations and heavily trafficked Hanseatic cities were natural havens for the fleas that carried the bacteria.

The rats that lived in these inhabited areas provided a source of food and vectors through which infected fleas could spread very long distances in a short period of time.

In Germany, the plague raged through many cities, while the inhabitants struggled to understand the causes. Some considered the plague God’s wrath, while others blamed the Jewish populations – often forced to live in their own ghettos – for poisoning water supplies.

Pogroms occurred in cities such as Cologne, Mainz, Esslingen and Frankfurt, with the victims often burned at the stake.

Groups of men who whipped themselves in penitence, known as ‘flagellants’, were especially popular in the German lands. Rather than keep the plague at bay, it is thought that their long processions across the countryside actually helped spread the disease.

The plague burned out around 1350. However, its legacy is visible across Germany to this day. In the late 14th century and early 15th century, the ‘Totentanz’, or ‘dance of death’ would become a popular motif in art and literature.

A visual metaphor of the impartiality of death due to disease or misfortune, these paintings of skeletons, or poems describing them, could be found in cities such as Ulm, Lübeck and Berlin.

Perhaps the most recent pandemic that many are aware of is the ‘Spanish Flu’ of the early twentieth century.

Rather than originate in Spain, as the name would suggest, it is thought this severe strain, or strains of influenza, originated in the unhygienic and primitive conditions of the Western Front.

Brought to America by returning troops in 1918, the virus returned to mainland Europe in a more potent form. Patients being treated for the Spanish flu in the US state of Kansas. Photo: Wikimedia Commons

From the records that were kept, it appears that just over 420,000 Germans died from this influenza pandemic.

While significantly lower than the plague previously discussed, a mutation of the virus made young, healthy people – those least likely to die – particularly vulnerable.

Paradoxically, it was their immune systems that were compromised by what is now known as a ‘cytokine storm’, effectively turning the body’s own defences against themselves.

While the Spanish Flu of 1918 was far more virulent and devastating than prior outbreaks, its deadliness may have spelled its own demise.

The disease ‘burned itself out’ within two years, helped along by better hygiene controls and government intervention in public health.

While the coronavirus does concern many, we shouldn’t think that it will have the same devastating effects as the epidemics and pandemics mentioned.

Understanding of the mechanisms by which viruses and bacteria spread is now highly advanced, and models of disease spread allow scientists and policymakers to target their resources effectively.

Medical science and modern healthcare systems, such as Germany’s, also have the potential to isolate and treat those who have come into contact with the virus in ways our ancestors could only dream of.

It’s simply not possible for a contagion to have the astonishing spread and lethal effect of, say the Bubonic Plague of 1348.

Both the government and independent medical professionals both advise that regular washing of hands, covering the mouth when sneezing and self-isolating in case of infection can limit the spread of the virus.

Keeping this in mind, while it is rational to be worried, we should not fear that we have anything on the scale of historic pandemics facing Germany.