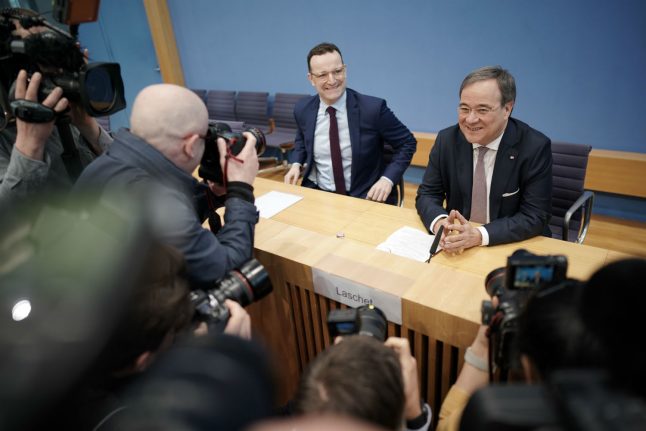 Merkel's centre-right Christian Democratic Union has been in turmoil after her heir apparent Annegret Kramp-Karrenbauer resigned as party chief this month over her supposed failure to stop regional MPs from cooperating with the far right.

With its popularity sinking, the party that has dominated German politics for 70 years is seeking a new boss to shake it out of an identity crisis on how to position itself against the resurging extreme right.

Armin Laschet, premier of Germany's most populous state North Rhine-Westphalia, became the first to throw his name into the hat alongside Health Minister Jens Spahn as his potential deputy.

They will come up against Merkel's longtime rival Friedrich Merz, a 64-year-old corporate lawyer who is popular with the CDU's more conservative factions.

Merz wants to shift the party to the right to woo back voters lost to the anti-Islam, anti-immigrant AfD.

Narrowly beaten for the party top job in December 2018 by Kramp-Karrenbauer, Merz has been waiting in the wings ever since.

With Kramp-Karrenbauer's resignation leaving the party's top brass in disarray, Spahn warned that the CDU was “in the biggest crisis in its history”.

Action has to be taken to ensure that Merkel “is not the last CDU chancellor in Germany”, he said, and that the party does not become a fringe party with “just five percent of the votes”.

The scathing assessment came after the CDU scooped just 11.5 percent in a regional election in Hamburg at the weekend — its second worst result ever in a state poll.

Another candidate, centrist Norbert Röttgen, a former environment minister dismissed by Merkel in 2012, is also expected to put forward a bid.

The outcome of the leadership vote on April 25th will not only set the tone for the party but could also determine whether Merkel would be able to stay German chancellor until next year's elections.

Merkel's prefered successor Kramp-Karrenbauer announced her resignation on February 10th after barely a year as head of the party, felled after Thuringia's CDU lawmakers sided with the far-right Alternative for Germany (AfD) in a vote for state premier, defying an edict from Berlin not to ally with the extremes.

The watershed in Thuringia underlined the challenge faced by the CDU as the political landscape in Germany becomes more splintered, making it more difficult for parties to form stable majorities.

While Merkel had once consolidated the CDU as Germany's biggest party by shifting her party to the centre, today the far right is on the rise.

READ ALSO: From 'avenger' to 'anti-Merkel': Who could be Germany's next chancellor?

The nationalist AfD has capitalised on anger over Merkel's decision in 2015 to keep Germany's borders open to migrants and despite repeated scandals has held on to double-digit support, with backing still growing particularly in eastern Germany.

Merz has underlined his ambition to halve AfD's backing by wooing its supporters back to the CDU.

But Laschet acknowledged that he was taking a different approach, saying that in Hamburg the party had lost significant ground to the centre-left SPD and the Greens.

For him, the CDU can win only if it is a uniting force.

“We are living in a time… when things are running in opposite directions — on one hand we are economically strong, successful, but despite that, there is a lot of dissatisfaction in society, so much aggression, so much anger, so much hate,” he said, underlining “cohesion” as a key goal.