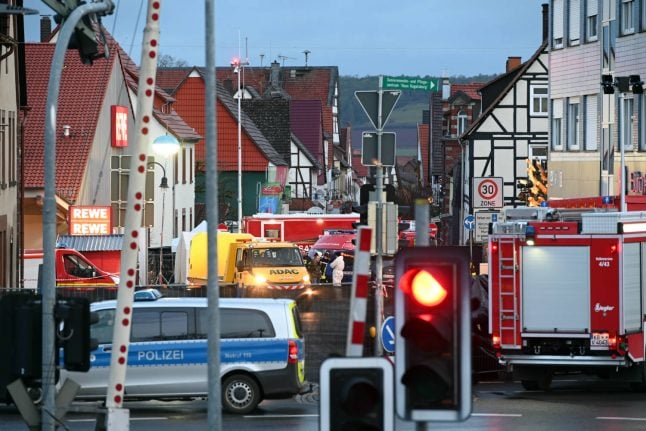 Police and emergency workers at the scene of the incident on Tuesday morning. Photo: DPA

In an afternoon statement, police said the number injured had now reached “almost 60” and asked those hurt in the incident or with possible evidence to come forward.

Investigators said the 29-year-old German driver had not been drunk at the time of the incident on Monday, but could not yet rule out that he was under the influence of drugs, national news agency DPA reported.

The suspect has still not been questioned because of his own injuries, a police spokesman told reporters near the scene of the incident in Hessian town Volkmarsen.

Among the injured in the ramming were 18 children aged from just three years.

It followed just days after a gunman with suspected racist motives killed nine people with migrant backgrounds in Hanau, also in western Hesse state, prompting fears of a repeat attack.

Officials cancelled all carnival parades across the state Monday, while a children's procession was called off Tuesday in state capital Wiesbaden.

But authorities have stopped short of calling the incident an attack until they know more about the driver's motives.

“I saw him drive off, he looked as if he was on drugs and said 'soon I'll be in the papers',” a neighbour of the suspect told German broadcaster RTL.

Nevertheless, prosecutors in Frankfurt have opened an investigation on suspicion of attempted homicide.

Prosecutors said they had also arrested a second person who filmed the car rampage, citing a privacy law against gawkers.

Eyewitnesses described how the man ploughed his silver Mercedes at high speed through a barrier and into crowds at the traditional “Rose Monday” parade in Volkmarsen, a small town in Hesse state.

“There were 15 people lying on the ground when I arrived, including many small children,” local journalist Elmar Schulten told mass-market daily Bild.

“Everyone looked as if they'd been crying, including grown men, fathers who had seen their children lying on the ground.”

Early Tuesday, carnival floats and balloons were still in place around Volkmarsen, while emergency vehicles remained at the scene as the perpetrator's car was hauled away.

Hessian police said that among the injured, 35 remained in hospital while 17 had already returned home.

The party, traditionally celebrated mostly in western Germany, had been a welcome relief for a country shaken by Wednesday's deadly Hanau shootings.

READ ALSO: How Germany plans to crack down on dangerous far-right extremists

The rampage fuelled concerns over the country's increasingly emboldened far-right scene, after a pro-migrant politician was murdered in June and an anti-Semitic attack on a synagogue left two dead in the city of Halle last October.

Meanwhile the sight of a car ploughing through crowds recalled Germany's deadliest terror attack in recent history, when a jihadist drove his truck into a crowded Berlin Christmas market, killing 12 people in December 2016.

After the Hanau shootings, Interior Minister Horst Seehofer on Friday vowed to put more police at mosques, train stations, airports and borders.German authorities scrambled
Tuesday to determine the motives of a man who ploughed his car into a carnival
procession, injuring dozens and further unsettling a country rocked by a fatal
mass shooting last week.