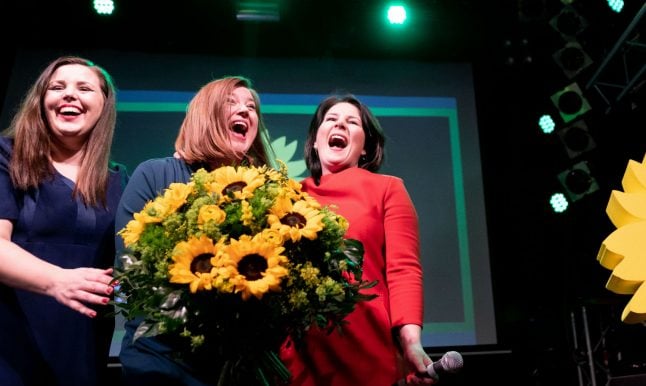 According to the Infratest exit poll, the biggest winners in Sunday's vote were the progressive, ecologist Greens.

They more than doubled their score to over 25 percent after climate change shot to the top of Germany's political agenda in 2019.

After weeks of intense political turmoil at national level, including never-before-seen cooperation between the centre and far right, some 57 percent had cast their vote by 4 pm, two hours before the polls closed, election officials said on their website.

READ ALSO: What can we expect from Hamburg's state elections on Sunday?

The centre-left Social Democratic Party (SPD) defended its position as the strongest force with 37.5 percent, while shedding over eight points on 2015.

By contrast, Chancellor Angela Merkel's conservative Christian Democratic Union (CDU) lost more than four points, to 11.5 — one of its worst-ever scores in any German region.

The party has been sapped across Germany by a long-running leadership crisis, sharpened by its unprecedented apparent alliance with far-right Alternative for Germany (AfD) earlier in February.

AfD itself and the liberal Free Democrats (FDP) may both have failed to clear the five-percent hurdle needed to enter parliament, the poll suggested.

With the marked boost for the Greens and grinding down of the formerly dominant CDU and SPD, Hamburg's results reflect in some respects the broader political picture of fragmentation visible in Germany-wide polls.

But the prosperous port city with a proud left-of-centre tradition may also be the first state to deny AfD seats in parliament, just two years after it completed its sweep into all 16 German state legislatures in a post-World War II first for a far-right party.

In many other parts of Germany, AfD polls in double digits, scoring above 20 percent in several recent state elections in the former communist east.

That has been enough to throw sand in the gears of regional politics, with national repercussions.

Earlier this month, Merkel's conservatives were shaken by the apparent alliance of their regional branch in eastern state Thuringia with AfD, voting in an FDP politician as state premier.

The breach of a historic political taboo provoked a nationwide backlash against both the mainstream right-of-centre parties.

As a result, CDU leader and Merkel's heir apparent Annegret Kramp-Karrenbauer announced her resignation, throwing open the question of who will succeed the veteran chancellor following elections next year at the latest.

READ ALSO: Merkel 'heir' AKK will not run for for German chancellor

She is set to announce Monday how the party will select a new leader or leadership team.

Meanwhile the SPD can breathe easy after years of ever-grimmer federal and state election results that have seen nervous party members chew through multiple leaders.

On the national level, the Greens appear to have claimed the party's former place as rivals to the CDU for the chancellorship. Tschentscher, 54, to remain in office as head of a “red-green” coalition.

While Hamburg's political make-up is unusual, events in the final week of campaigning showed that the port city is far from insulated from events in the rest of Germany and Europe.

On Friday, Swedish climate activist Greta Thunberg joined a massive “Fridays for Future” demonstration in Hamburg attended by around 10,000 people, according to police.

Weekly marches across the country by the school strike movement last year helped force Berlin to raise its climate ambitions and fix a binding end to coal power generation by 2038 in law.

At the same time, support for the Greens has surged across the country.

READ ALSO: Why is the Green Party suddenly flying high in Germany?

Meanwhile, both the SPD and the Greens cancelled final campaign events on Thursday, after a racist gunman killed nine people with migrant backgrounds in the city of Hanau.

People from across the political spectrum have blasted AfD in the wake of the killings, highlighting similarities between its politicians' anti-migrant rhetoric and the words of the gunman in a rambling “manifesto” he is believed to have posted online.