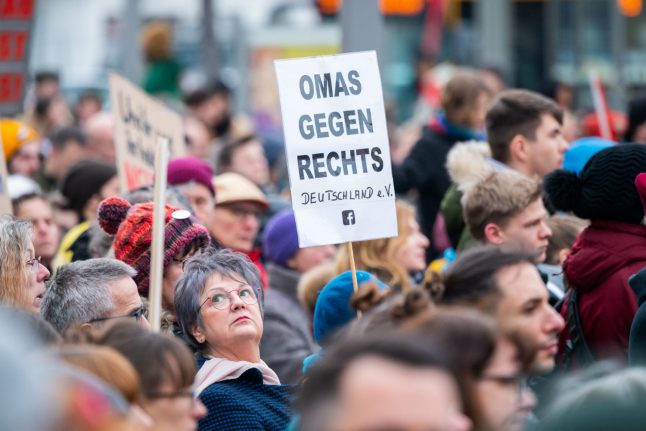 'Grandmas against the right': Photo: DPA

Some have even asked that the hard right be subjected to police surveillance.

“We have known for a long time that words can be followed by action and the elected representatives of the people cannot shirk this responsibility,” said the chairman of the chamber of deputies, Wolfgang Schauble, in an interview with the daily Handelsblatt on Saturday.

In his sights is the hard-right Alternative for Germany (AfD) party, which since 2017 has become the main opposition force in the Bundestag with 89 elected officials.

It has played on stoking fear in the population following the arrival of more than a million asylum-seekers in 2015 and 2016.

“The problem is that the AfD knows no bounds,” added Schauble, a member of Angela Merkel's conservative party. He goes so far as to call Bjorn Hocke, the leader of the most radical wing, a “fascist”.

The general secretary of the social democratic party SPD, coalition partner of the conservatives in Berlin, Lars Klingbeil, described the AfD as the “political arm” of the perpetrators of racist and anti-Semitic attacks.

Such attacks have been on the increase and were again in the news this week with the murder of nine people in Hanau.

According to political scientist Carsten Koschmieder, there is no question of criminal liability. “But it is clear that what the AfD and some of its politicians say contributes to such acts,” he told public broadcaster ARD.

Obsessed with racist theories, the Hanau attacker spoke in a “manifesto” he left behind about the dilution of the Germanic race by the naturalisation of foreigners.

“This is exactly the speech of the AfD,” says Koschmieder.

The party claims to be the victim of a slander campaign with its leader Alexander Gauland accusing critics of “instrumentalising” an act that had no link to his party.

The AfD quickly ascribed the Hanau attack to an unbalanced individual who should never have had access to a gun.

In a poll published on Saturday by the Forsa Institute, the AfD has dropped two percentage points since Wednesday's attack, giving them no more than nine percent support across the country.

The pressure is mounting, however. The left is demanding that the entire AfD be subject to surveillance by the Interior Intelligence Service, a treatment reserved in Germany for organisations representing a danger to the state.

Already, the most radical fringe of the AfD is in the crosshairs.

On Saturday, officials from the two government parties also demanded that AfD activists be banned from the civil service.

“We clearly expect public service to have a clear attachment to our democracy,” said Chancellor Patrick Sensburg, an elected member of the CDU's Christian Democrat party.

“Membership of the AfD cannot, in my opinion, be compatible.”

Klingbeil has demanded that Hocke, the leader of the most extreme section of the movement, lose his civil servant status.

“He is an enemy of democracy who cannot serve the state,” Klingbeil said on Twitter.

There have already been consequences.

The election of a liberal politician as state premier in Thurungia on Friday was shrouded in controversy after he received the backing of both the centre and the far right.