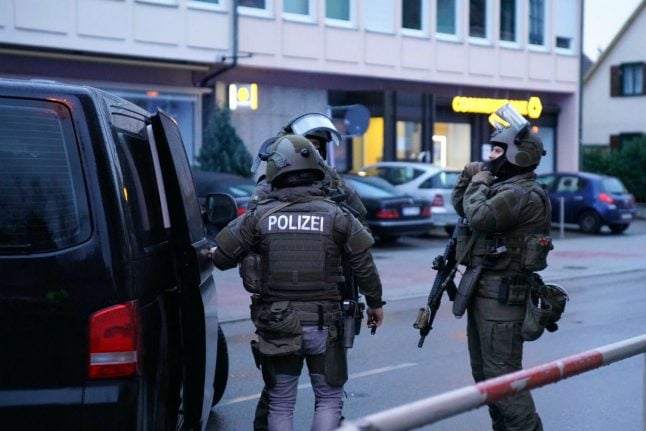 Members of the special task force in Plochingen, Baden-Württemberg during a police operation earlier this month. Photo: DPA

Officials said that investigations into 12 men detained in police raids across Germany Friday had indicated they planned major attacks, following media reports over the weekend the group aimed to launch several simultaneous mass-casualty assaults on Muslims during prayers.

“It's shocking what has been revealed here, that there are cells here that appear to have become radicalised in such a short space of time,” Interior Ministry spokesman Björn Grünewälder told reporters at a Berlin press  conference.

“It is the task of the state, and of course of this government, to protect free practice of religion in this country, with no reference to what religion it might be,” Chancellor Angela Merkel's spokesman Steffen Seibert said.

“Anyone practising their religion in Germany within our legal order should be able to do so without being endangered or threatened”.

According to media reports, the group planned to use semi-automatic weapons to imitate last March's attacks in Christchurch in New Zealand in which 51 people were killed at two mosques.

The alleged leader of the group, which was known to the authorities and had been under observation, had detailed his plans at a meeting organised with his accomplices last week.

Investigators learned about it from someone who had infiltrated the group.

Prosecutors said Friday they had launched early morning raids to determine whether the suspects already had weapons or other supplies that could be used in an attack.

German authorities have turned increased attention to the country's underground extreme right scene since the murder of conservative local politician Walter Luebcke last June and an October attack on a synagogue in eastern city Halle.

At the time, police said they had identified 48 people on the extreme right as “dangerous” individuals who could carry out an attack.