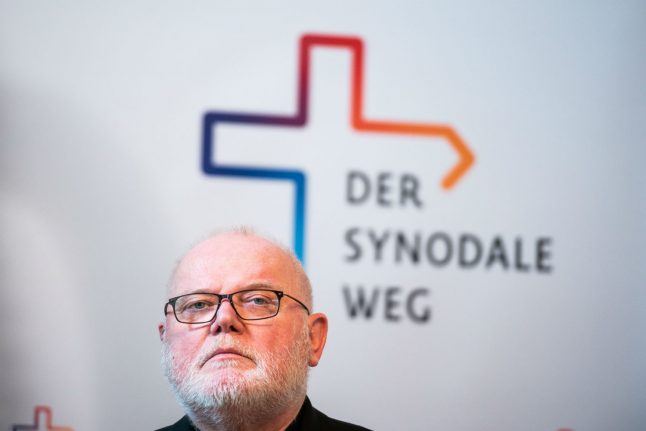 Cardinal Reinhard Max at a press conference for the "synodal path" reform initiative in Frankfurt in January. Photo: DPA

In a letter published by the German Bishops Conference, Cardinal Reinhard Marx told his fellow bishops he would not seek another term as head bishop when the assembly elects its chairman in March.

“I think it is time to let the younger generation have their turn,” Marx wrote, pointing out that he would be 72 by the time the next election comes around.

“Perhaps it is good if this task changes hands more frequently in future.”

Marx said he would continue to actively support the Bishops Conference, especially with regard to the “synodal path” reform initiative.

Launched on the back of a Church report into historic sexual abuse cases, the “synodal path” is a series of discussions on issues including an end to celibacy and a greater role for women in the Church.

The two-year reform initiative officially began in December last year, but has already fuelled divisions amongst Catholic leaders in Germany.

Conservative bishops have openly criticized it, while progressives have praised Marx for his attempts to tackle the issue of sexual abuse in the Catholic Church.

Reacting to Marx's surprise announcement on Tuesday, the head of the Central Committee of German Catholics Thomas Sternberg said that the cardinal “embodied the hope of a new image of the Church in Germany”.

At last year's episcopal conference in the western city of Lingen, Marx said the era of silence was “over”.

“No-one among us can still negate the problem or treat it as a taboo,” he said.

Yet victims accused the Church of continued stonewalling, especially on compensation.

The German Bishops Conference will elect its new leader on March 3rd at a conference in Mainz.