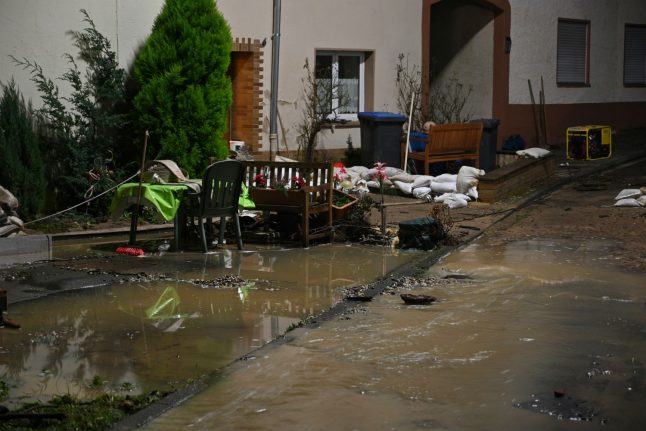 Water floods the village of Aach in Rhineland-Palatinate on Tuesday. Photo: DPA

Munich's S-Bahn services on lines S1 and S2 were partially closed on Tuesday morning due to trees falling onto the overhead lines, a spokesman for Deutsche Bahn said.

West of Augsburg, two rivers burst their banks and flooded streets. According to police, seven people have been injured in the stormy weather since Monday lunchtime.

Heavy rain has also triggered numerous rescue operations in the south-west of the country.

The town centre of the community of Aach near Trier, Rhineland-Palatinate, was flooded during the night.

In the Oberemmel district of Konzer a river overflowed its banks, which resulted in people becoming trapped in their homes due to the build up of water. The fire and rescue service managed to free the affected residents in the middle of the night.

In several places across the district, emergency services had to shut off flooded roads. A total of 440 forces were deployed. Meanwhile, the railway line between Perl and Trier was closed on Tuesday morning.

Deutsche Bahn issued a tweet urging customers to check for delays and cancellations due to the stormy weather. After heavy rainfall, water levels along the Moselle river are rising sharply. Early on Tuesday morning, the water level in Trier was over 8.40 meters according to the Flood Reporting Centre, and it was still rising. The normal water level is about 3.25 meters.

It's due to heavy rainfall coming from the Vosges mountains in France, where the Moselle river begins. The Moselle flows into the Rhine near Koblenz.

In Saarbrücken, the capital of Saarland, police closed the city highway early this morning.

In Stetten am kalten Markt near Sigmaringen, a tree fell on an apartment building, punctured the roof and damaged three cars. According to police, the damage amounts to around €60,000. No injuries have been reported.

Fire and rescue services as well as police were called out to operations in Freiburg and the surrounding area dozens of times.

On Tuesday police tweeted: “The storm is keeping emergency services on tenterhooks. Throughout the area, fallen trees are causing danger in road traffic – we ask for special caution and consideration. Please avoid the dams of major rivers in our area.”

READ ALSO: Nine ways to get through winter the German way

In the Waldshut district in the south of the state, the emergency services were also busy. Strong winds damaged houses and toppled trees as well as fences.

Police in Karlsruhe reported that trees had fallen, while smaller streets and cellars were flooded. In Stuttgart, a tree fell on a car. According to police, there have been no injuries.

Until at least Tuesday lunchtime, the DWD expected heavy continuous rain in the region. In the Black Forest, around 120 liters per square meter and 150 liters in congested areas is said to have fallen within 72 hours.

The DWD also warned against stormy gusts with speeds between 50 and 70 kilometres per hour.

There's also been some snow. In the Ore Mountains and the Thuringian Forest area, snow fell during the night. In mountainous regions in Saxony, Saxony-Anhalt and Thuringia, the snow is also expected to stay on the ground, according to the DWD.

“Care is also required on the roads there,” said the DWD.