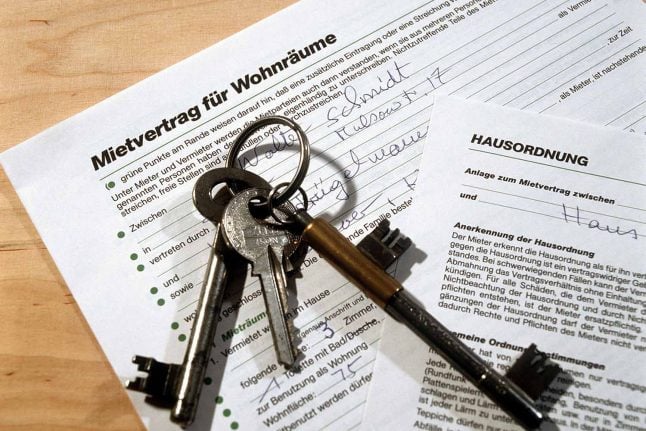 Whether you speak German or not, getting your head around the complex words used in renting in Germany.

Meaning tenant or renter, Mieter comes from the German miete which means to rent.

Vermieter means landlord – although the latter is frequently used in super-hip Berlin and Hamburg.

The German word for lease, Mietvertrag – literally rent contract – is the document between you and your landlord which allows you to live in the flat.

As we discussed in our report on the Anmeldung (address registration) process, you’ll need to show this at the Bürgeramt to receive your Meldebescheinigung (certificate of registered address).

When moving into an apartment block, you’ll frequently be told whether your potential flat-to-be is an Altbau (old building) or a Neubau (new building).

This can however be confusing, as the highly sought after Altbau can frequently look much newer and nicer than the Neubau, the latter of which can often be found at the outskirts of larger German cities.

Buildings from before the Second World War are known as Altbau, whereas those made afterwards are known as Neubau. Meaning either bond or deposit, Kaution is the money paid as a security deposit when you move into a flat to provide the landlord with a degree of protection should you fail to pay the rent or if the flat is damaged.

Foreigners are frequently targeted with Kaution scams, so be sure to discuss the nature of your Kaution and how it will be returned when moving into a flat.

Right out of the same category as ‘Handy’, ‘Public-Viewing’ and ‘Beamer’, Casting is an English word which has taken on a different and somewhat odd use in German.

Although it will not always be the case, a Casting can be structured much like a job interview – with each of the existing housemates asking a variety of questions to determine if you’re truly worthy.

Literally translating as rent-debt-freedom-certificate, the Mietschuldenfreiheitsbescheinigung is a document which confirms you are not in rental debt for any of your previous properties.

Remember that the German word for debt (Schuld) also means guilt – so anyone hoping to rent a flat will need to prove that they are debt free.

Another Bescheinigung, the Verdienstbescheinigung is a document from your employer which shows your earnings.

Given the highly competitive property market in many German cities, you’ll want to have this document on hand for when you first see – and decide to apply for – the property.

Nebenkosten, which are otherwise known as Betriebskosten, means all the extra costs associated with the apartment other than the rent. These include water, gas, internet, heating, electricity and insurance costs. More commonly known as a ‘W-G’ (pronounced ‘vey-gay’), Wohngemeinschaft is the German name for a share house. The word literally translates to ‘residential community’.

WGs are common in Germany for students and adults alike, given that the country’s unique and sometimes complicated Altbau architecture can create share houses with a significant amount of privacy and independence.

If you live in a WG, you’re likely to have one or more Mitbewohner. Translating literally as ‘with-occupant’, Mitbewohner means housemate or flatmate.